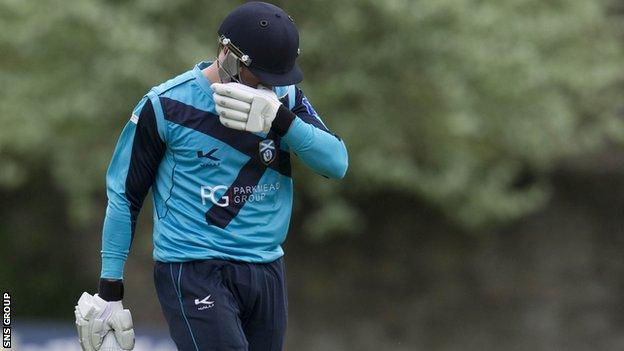 Scotland's hopes of qualifying for the 2014 World Twenty20 finals were dented by a 92-run defeat by Kenya in Dubai.

It is the Scots third defeat, having already lost to Bermuda and Afghanistan in the eight-team Group B, with their sole victory coming against Nepal.

Scotland briefly threatened to chase the score but Kenya spinner Steve Tikolo, 42, took four wickets for two runs in eight balls to wrap up the win.

Veteran Tikolo also impressed with the bat, hitting two sixes and two boundaries in an 11-ball 20 as Kenya raced to 45-1 in the fourth over.

Scotland slowed down the run rate with Morris Ouma and Thomas Odoyo falling to successive balls from Iain Wardlaw.

But Aga plundered 52 off 25 balls and captain Collins Obuya also impressed on his way to making a run-a-ball 36 before he was run out in the final over.

In reply, Scotland opener Richie Berrington hit two fours and a six in a speedy 19 but he was caught by Shem Ngoche at mid-on off the bowling of Eric Odhiambo.

Matt Machan then hit three successive boundaries before being caught and bowled by Ngoche for 13, while Calum MacLeod and skipper Kyle Coetzer succumbed to successive deliveries from Hiren Varaiya to leave Scotland 51-4 after 5.2 overs.

Rob Taylor smashed two sixes in his 17 before he was caught by Rakep Patel at long-on and, after Gordon Goudie, David Murphy and Safyaan Sharif were all dismissed by Tikolo, Scotland found themselves needing 95 runs from 48 balls to win.

Neil Carter and Iain Wardlaw scored one apiece as Ngoche and Tikolo ended the Scots' hopes of a recovery.

Scotland are seventh in Group B and next face Papua New Guinea in Dubai on Thursday.