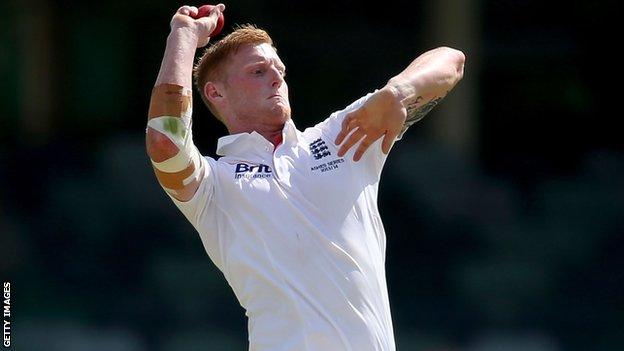 Scores over 500 in the first innings:

All-rounder Stokes is unlikely to be selected for Thursday's opener in Brisbane as England are expected to use an orthodox four-man bowling attack.

The wicket at Adelaide, the venue for the second fixture, has a reputation for being flat and high-scoring.

"For that pitch, I think there's a spot up for grabs to have a fifth bowler and Ben is that player," said Harmison.

Even as 12th man, being on an Ashes tour is just great for him

He is yet to make a significant contribution with the bat, but

"It would be good to see him get some action and Adelaide is his best chance," Harmison, a team-mate of Stokes's at Durham until he retired at the end of the season, told BBC Newcastle.

"I think the England selectors will be looking there and at Sydney [for the fifth match] in terms of potentially taking a batsman out of the side.

"At Sydney it's kind of tradition to play a second spinner so Ben may well come into the reckoning there too and Ben has shown he can take wickets at international level."

As a part of Stokes took 42 wickets at an average of 26.57 and contributed 615 runs batting in the middle-order.

The family moved to England in 2003 when Ged became coach of Championship side Workington.

Prior to 22-year-old Stokes had not been included in an England Test match squad.

"Going on an Ashes tour is just fantastic and I am sure he will grasp the opportunity with both hands," added Harmison.

"Even if the only action he gets is as 12th man, it'll be a great experience and we in the North East should be proud to have him out there."