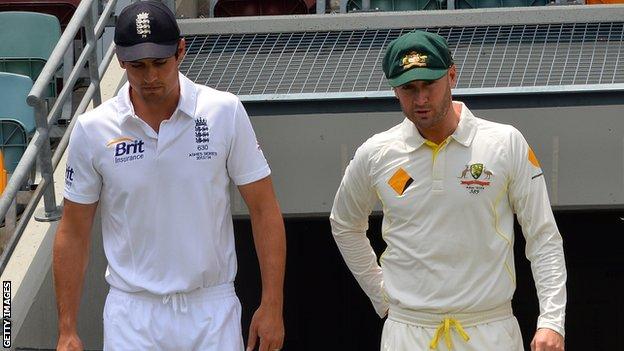 England will attempt to win a fourth consecutive Ashes when the five-Test series starts in Brisbane at 00:00 GMT - with key batsman Kevin Pietersen being hailed as their best ever player.

Pietersen will play his 100th Test in front of a crowd of 42,000 at the Gabba, as captain Alastair Cook's team will defend the trophy they retained in the summer by beating Australia 3-0.

Ex-England pace bowler Steve Harmison, who played alongside Pietersen in the 2005 and 2009 Ashes-winning sides, told BBC Sport: "Kevin is the best player ever to wear an England shirt.

"He's not the best English player to play for England because he's not English, he is South African, but he is the best player ever to wear an England shirt.

"He has changed the face of the game and the way people, especially young players coming into the game, view the game.

"English people have to be thankful that somebody like that has come along.

"I think he will set all the records for a short period of time before Alastair Cook beats them a little later after Pietersen retires."

Pietersen's role will be pivotal if England are to win in Australia, as they did by a 3-1 margin the last time they travelled down under in 2010-11.

The history of the urn dates back to 1882 when following England's first defeat by Australia on home soil at The Oval in August, the Sporting Times carried a mock obituary of English cricket, which concluded that "the body will be cremated and the ashes taken to Australia."

When Ivo Bligh captained England to victory on the return tour to Australia a few weeks, later he was given a small terracotta urn as a symbol of the Ashes.

The current Ashes series will see England play games in Brisbane, Adelaide, Perth, Melbourne before the final Test, which begins on 3 January in Sydney.

Both countries have won 31 Ashes series each although Australia have won 123 of the 314 Tests between the sides, with England's victory tally standing at 103.

If England were to win the Ashes in Australia this winter, it would be the first time in more than 80 years that England have won successive series down under.

Australia are expected to start well at Brisbane's Gabba, a ground where they are unbeaten in their last 24 Tests since losing to West Indies in 1988.

However, England's 2005 Ashes-winning captain Michael Vaughan has detected a hint of anxiety in Australia skipper Michael Clarke ahead of the first Test.

He told BBC Radio 5 live's Your Call programme: "Michael Clarke is interesting because he was cranky in his press conference.

Welcome to the Gabba

Read more about Brisbane with our ground guide

"The majority of Australians think they will win the series 2-1.

"But this is an England team with so much experience. They have won the last three series against Australia.

"Maybe Clarke is not as confident as the Australia public."

England will wait until the last minute before deciding whether wicketkeeper Matt Prior will play in the opening Test.

Prior, 32, is recovering from a torn calf muscle as he attempts to continue his run of 57 consecutive Tests.

"We will monitor him. He is a crucial cog in our side and we desperately want him to play," said England captain Alastair Cook.

"But he can't be risked. Five days is a long time to keep wicket in this heat."

Yorkshire's Jonny Bairstow, 24, will step in behind the stumps if Prior fails to prove his fitness in time to play in the first match of the five-Test series.

Apart from Prior, England's main selection issue is the choice of a third paceman with Chris Tremlett, Steven Finn and Boyd Rankin all fighting for one place, although none of the trio have stood out in England's three warm-up games.

Finn has taken more wickets, with 11 compared to Rankin's seven and Tremlett's one, although the Middlesex man's economy rate of 4.44 is higher than that of Rankin (3.21) and Tremlett (3.94)

"I am confident that whoever we pick will do a good job for us," added Cook.

"They are here because they are very good bowlers and the confidence of knowing they are playing might do them the world of good."

Australia have recalled fast bowler Mitchell Johnson for the series with captain Michael Clarke confident he can trouble England's batsmen.

Left-armer Johnson, 32, has played only four Tests in the past two years, following a poor series when England won the Ashes in 2010-11.

Clarke said: "Mitch has shown over the past 12 months that in coming back to the Australia team he is bowling very well. He is bowling with pace and getting the ball to swing.

"At the moment, he has shown the selectors he is back to his best and pushed them to name him for this Test series. I know he is excited."

Johnson will have to handle being the target of abuse from England fans - as he was the last time they travelled down under.

But Clarke insists the paceman and his team are mentally tough enough to cope with the pressure of an Ashes series.

He added: "This is a tougher and more experience team than it was four months ago."

Clarke also believes all-rounder Shane Watson will be able to bowl at some point in the first Test at the Gabba despite suffering from a hamstring strain.

"But he has improved every single day. I'm really confident he'll be able to bat at his best, and do a job with the ball."