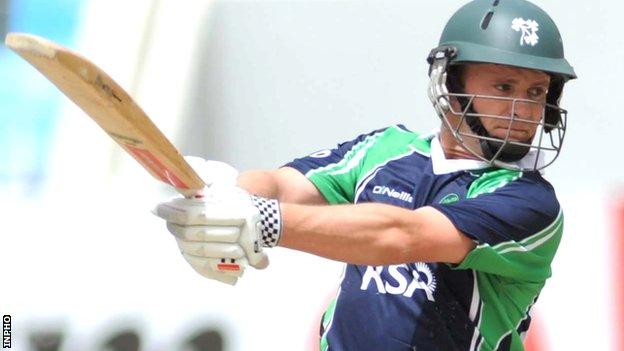 William Porterfield became the first player to score a Twenty20 century for Ireland with a superb unbeaten 127 in their 75-run win over the USA.

The captain's record knock came from only 69 balls as the Group A leaders made a massive 216-3 in the ICC World Twenty20 Qualifier in Abu Dhabi.

The United States never threatened the Irish total and were bowled out in the final over for 141.

"It's pretty pleasing to go out there and strike it so cleanly from the off - they've been pretty good decks out here," said Porterfield.

"It more pleasing to get a convincing win and you don't often get 200 runs and take 10 wickets in T20 cricket."

Porterfield and Paul Stirling (25) shared an opening stand of 94 with Kevin O'Brien adding 18 and John Mooney an unbeaten 32.

It is Ireland's fourth win from four matches, leaving them as the only side with a 100% record in either of the qualifying groups.

They are back in action on Thursday against Italy at the same venue.