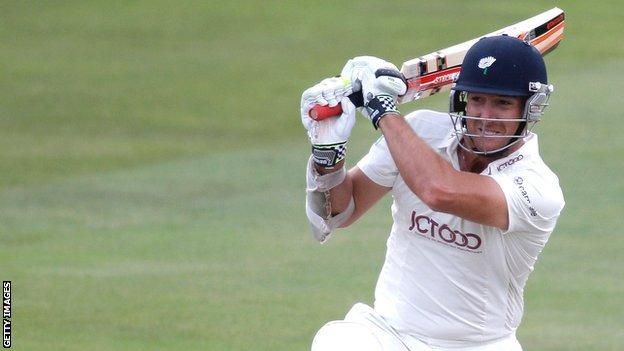 Nottinghamshire have signed former Yorkshire and Australia batsman Phil Jaques on a short-term deal for the early stages of the 2014 season.

The 34-year-old has joined until mid-June to provide cover for the expected absence of Alex Hales in the early stages of the County Championship.

"Phil is highly regarded for his ability and for his character," said director of cricket Mick Newell.

Hales has been given permission to seek an Indian Premier League contract.

"This deal was on the cards when we granted permission for Alex to seek an IPL deal and it fits nicely with Phil's desire to play county cricket next season," said Newell.

Left-hander Jaques, who now holds a UK passport, made 770 runs in 14 matches in 2013 to help Yorkshire claim second place in the Championship, but he has retired from first-class cricket in Australia, where he is now playing and coaching in Sydney with club side Sutherland.

He had two spells playing for Yorkshire, having also represented Northants and Worcestershire, and is scheduled to arrive at Trent Bridge on 1 April.

"I've spoken to a few of the Australian players who have played for Nottinghamshire and they all speak very highly of the set-up, the people and the ground," he said.

"A short-term deal fits nicely for me with having a young family and I look forward to making a contribution."