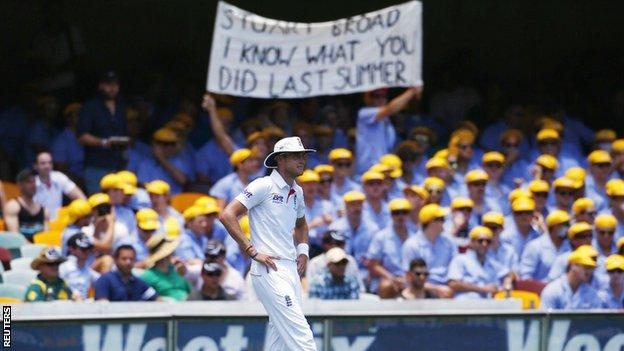 England paceman Stuart Broad was able to laugh off the boos he received from Australian fans on the first day of the Ashes after he took 5-65 as the hosts were reduced to 273-8 in Brisbane.

"I braced myself to expect it, and I think I coped well - I was singing along at one stage.

"We could have bowled them out cheaper, but those wickets at the end have put us in a great position."

Broad has been handed the role of England's pantomime villain for this series down under ever since he chose not to walk in the first Test at Trent Bridge back in July.

Australia coach Darren Lehmann gave a radio interview in August in which he called Broad a "blatant cheat", hoped the Aussie fans "give it to him from the word go", and ended by saying "I hope he cries and goes home".

Broad said on Thursday: "I'm pleased my mum wasn't here, but I don't give it the time of day. We don't read the papers, it doesn't spur me on, and you don't need any more inspiration than playing for your country.

"In our medical assessments our psychologists said three players would thrive on abuse - me, Matt Prior and Kevin Pietersen. Ashes cricket brings the best out of me.

"As a team we don't focus on the opposition. We've been like silent assassins on this trip going about our business, and it's a relief to start the series well."

After being booed when his name was announced, Broad's first delivery was a no-ball which was hit for four, but he picked up the first four wickets, removing Chris Rogers, Shane Watson, captain Michael Clarke and David Warner, before returning to break a century stand between wicketkeeper Brad Haddin and Mitchell Johnson, who became his fifth victim.

"I didn't bowl too well in the morning session, my first few overs weren't the best but getting Pup [Clarke] out gave me a lift," continued Broad, who has dismissed the Aussie skipper in six of his last eight Test innings.

"I wouldn't say I have a hold over him - he's obviously their star man and his record is phenomenal. The key was getting him in early enough with a hard enough ball to make that plan work.

"Haddin and Mitch played well, but if we can get through the new ball when we bat we can build a big score."

Johnson, who scored 64 and added 114 for the seventh wicket with vice-captain Haddin, who finished unbeaten on 78, did his best to be positive and play down Australia's top-order collapse.

"It's not frustrating, it's an opportunity. We fought back hard and we're looking forward to bowling," Johnson told BBC Sport.

"We obviously don't want to be in that situation too often, but I enjoyed batting with Brad, he's very important and has always done a terrific job with the bat and gloves.

"I think the position that we're in is par but we have to assess the situation. Tomorrow morning, we want 300 plus and we think that's a really good score."

Of Clarke's dismissal, he said: "You want your captain to stand up and be the one that scores the runs but he's not always going to do that, and we have more than one good player in this team.

"It was obviously a plan to Clarke from Broad, something that Michael needs to keep working on. He's been working hard in the nets and I've seen him play the short stuff really well.

"Broad bowled very well this morning and used the short ball at the right time."