Stuart Broad defied the barracking of the Australian crowds by taking 5-65 on the first day of the first Ashes Test in Brisbane.

Michael Clarke won the toss and batted, but Australia slipped from 71-1 to 132-6 before Brad Haddin and Mitchell Johnson added 114 for the seventh wicket.

But England struck late to leave the Aussies 273-8 at the close, with Haddin 78 not out.

Full day one report from Brisbane

Man of the day 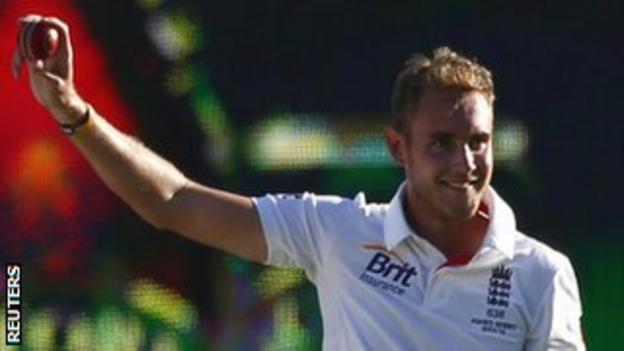 Stuart Broad defied his critics in the stands - and the press box - with a superlative bowling performance.

Depicted as England's pantomime villain by the home fans - and the Australian coach - since he chose not to walk in the first Test in England during the summer, he was booed when he came on to bowl, and showed signs of nerves as his first delivery was a no-ball which was dismissively pulled for four by David Warner.

However, he removed Chris Rogers with a short ball in his second over, went on to dismiss Shane Watson, Warner, captain Michael Clarke and returned to emphatically bowl Mitchell Johnson to finish with figures of 20-3-65-5.

Pint Sized Ashes: A two-minute round-up of the day

Newspaper of the day? 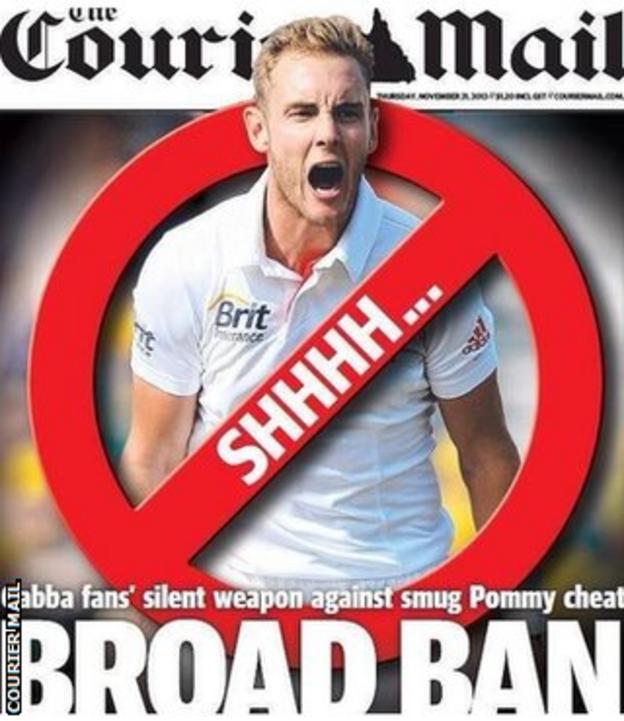 Brisbane's Courier Mail announced on Wednesday that it would not be printing Stuart Broad's name in their match reports, dubbing him a "smug Pommie cheat".

In their Twitter updates throughout play, they referred to "a 27-year-old English medium-pace bowler".

When Broad's father Chris, an ex-England batsman and now an ICC match referee, urged them to "mention the star performer's name", they congratulated Kevin Pietersen on a catch in his 100th Test.

Broad was clearly able to see the funny side, entering the close-of-play media conference with a copy of the Courier Mail tucked under his arm.

Moment of the day

Australia's batting line-up may be more settled than in the previous Ashes series, but much still depends on the form of captain Michael Clarke. 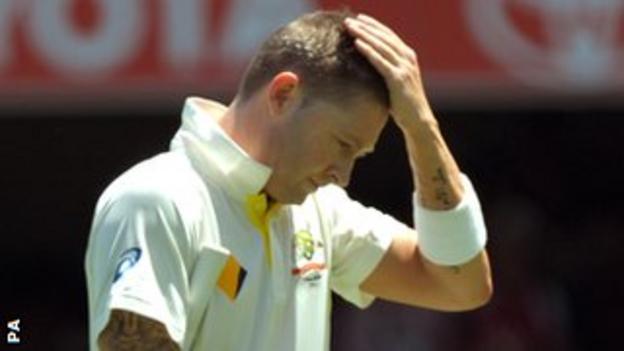 It will therefore be a concern at just how easy it was for England to remove the home skipper.

With Clarke - dodgy back and all - arriving in the final over before lunch, England's tactics were clear. In came the short leg, and a leg gully, Broad was going to dish out the chin music.

Clarke survived until the interval, but not much longer afterwards. Set up by some Broad full deliveries, he then had no answer to another lifting delivery, fending the simplest of chances to Ian Bell.

As Clarke departed for one, England celebrated the wicket with more jubilation than any other in the day, perhaps because of the simplicity of their plan.

It is one that could well be repeated throughout this series.

England pace bowler Stuart Broad: "I prepared myself for a few boos and I quite enjoyed it, though it feels a lot better having taken five wickets. The Aussies like to give opponents a bit of stick but they like good sports. Stats suggest the Gabba second flattest wicket in the world behind the SSC [Sinhalese Sports Club] at Colombo, so we need to knock them over tomorrow and if we can get through the new ball, we can really cash in."

Australia paceman Mitchell Johnson: "Stuart Broad ripped through us at the start, but Brad and myself put on a nice partnership, and we're definitely back in the game. We're about where we should be with all those wickets down, but we've got a morning to bat tomorrow."

Former England batsman Geoffrey Boycott: "Although I thought England did OK, I am not over the moon until I see the way we bat. Mind you Australia did not bat well, especially Clarke and Rogers who didn't play the short ball well. The top order didn't distinguish themselves but Haddin and Johnson got them out of jail."

Former England off-spinner Vic Marks: "How many times have you seen the ball go past the bat? How many lbw appeals have there been? Hardly any. This is a good pitch."

Former England captain Michael Vaughan: "Australia's top six is poor. Michael Clarke is their outstanding player, but England have a method against him. He has a real problem against the short ball. England know they only have to string a few maidens together and the pressure will tell on this Australia team."

Stephen Fry: David Warner is the Dick Dastardly or possibly Terry-Thomas of cricket. Stylish, wicked but impossible not to admire.

Ex-Australia batsman Tom Moody: The concern for Australia is that England's plans & their execution to our top 6 have been spot on, exposed so early in the series!

Comedian Michael McIntyre was at the Gabba, even finding his way into the England dressing room. Ian Bell tweeted a photograph of himself with the funnyman, while Graeme Swann wrote: "Someone's been in to steal my joke book."