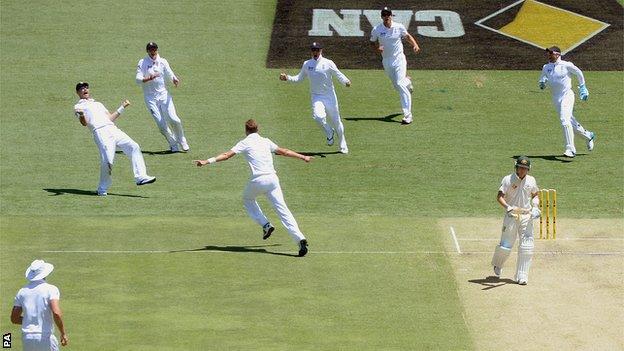 Going into this Ashes series, Australia were the ones doing all the talking.

They were full of hype about how they were going to scare England and win back the urn, but all their bravado has come back to haunt them after a disappointing batting performance on the first day of the opening Test in Brisbane.

When they look back on their display, they will be clutching at straws to find any positive advances they have made since the final Test of the summer Ashes series at The Oval. This was the opportunity to put their words into action, but it simply didn't happen.

Through a series of rash shots and misjudgements, their top order wasted a great opportunity as they slumped to 132-6 after winning the toss on a perfect batting pitch at the Gabba, before a partnership of 114 between Mitchell Johnson and Brad Haddin helped them recover to 273-8 at the close.

Michael Clarke's meek dismissal to a Stuart Broad short ball rather summed things up for the home side.

Broad clearly has the sign over the Australia captain after dismissing him six times in his last eight innings, and that is a worrying state of affairs for Australia.

It's always nice from an opposition perspective to have pressure on the captain of the other side, and Clarke will hate the fact that he got out in such fashion.

"Although I thought England did OK I am not over the moon until I see the way we bat. We didn't bat very well in the summer so I'm reserving judgement. Mind you Australia did not bat well today, especially Clarke and Rogers who didn't play the short ball well. The top order didn't distinguish themselves but Brad Haddin and Mitchell Johnson got them out of jail."

He will also know that he will get plenty more short stuff in the Tests to come and will do a lot of work to sort out how he is going to overcome the clear weakness that he has.

Clarke is a very fine player, so I'm sure he'll find ways of dealing with it. Maybe he should try to take it on, because he can't just carry on doing what he is doing at the moment and popping up simple catches like that.

For Broad, the first day was an absolute triumph and the perfect riposte to his critics.

He has been on the receiving end of plenty of flak from the Aussie press and fans - some of it tongue-in-cheek, but a lot of it quite personal as well - so to be able to show the ball to the crowd having taken five wickets is a real triumph.

Australia have a grudging respect for people who stand up and are counted, and they will grow to have respect for Broad.

It would be nice if the local Courier Mail newspaper could stop their rather silly campaign of not naming him in their reports, because Broad is a decent sportsman and deserves a bit more respect than he has been getting.

Broad was ably backed up by England's other bowlers and I was especially pleased to see Chris Tremlett performing well after being chosen as the third seamer ahead of Steven Finn and Boyd Rankin.

In a four-man attack, you cannot afford to have a weak link and on the evidence of today, England got their selection spot on.

When England chose Finn and Rankin for their final warm-up match in Sydney, it suggested they had narrowed it down to one of those two, but the way they both underperformed rendered them almost impossible to select.

Tremlett, therefore, went straight from bowling in the nets to bowling in the Ashes. He bowled the odd long-hop, but offered far more control than we saw from the other two in Sydney, and his return of 1-51 off 19 overs reflected a job well done.

The late fightback from Haddin and Johnson merely emphasised the failings of Australia's top order and showed what a good pitch this is for batting.

It was good to see Johnson taking on Graeme Swann and cracking him for a couple of sixes - the only worry from England's perspective is the possibility that he may take confidence from the way he batted into his bowling.

If Australia can get over 300, it will still be about 100 below par for the pitch and conditions, but it will at least be something to bowl at and England will have to be on their mettle with the bat.

It will be a really good test for them because so far on this tour they haven't been challenged at all. The pitches and the bowling have been nothing like what they are going to face here in the Test series.

Suddenly they are going to be facing a left-arm quick roaring in at over 90mph, and they had better be ready for it.