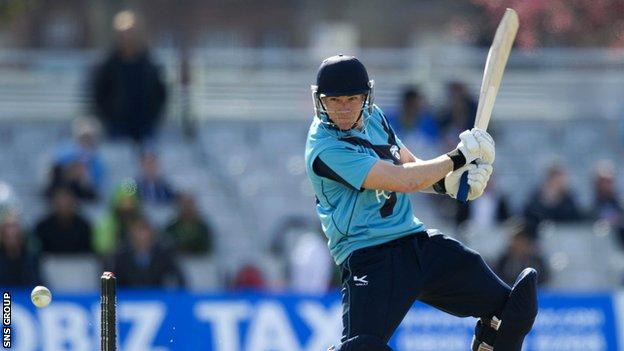 Scotland maintained slim hopes of reaching next year's World Twenty20 with an 84-run victory over Papua New Guinea in Dubai.

Batting first after losing the toss, the Scots made 181-5, with opener Calum MacLeod top-scoring on 58.

They are sixth in Group B with two games left and need to finish fifth or better to reach the next stage.

Six of the 16 teams competing will qualify for next year's tournament in Bangladesh, and Scotland face table-topping Netherlands and Denmark in their remaining group fixtures.

Scotland's openers got off to a great start, with MacLeod reaching his 58 from 40 balls and putting on 100 for the first wicket with Richie Berrington, who was dismissed soon after for 43.

Matt Machan chipped in with an impressive 44 from 25 balls, with Michael Leask (12) and captain Kyle Coetzer (11) providing brief support.

Papua New Guinea were quickly in disarray as they limped into the ninth over on 26-5.

Wicketkeeper Jack Vare top-scored on 22, with Goudie (3-15) and Taylor (3-16) the pick of the Scotland bowlers, while ex-England international Geraint Jones scored only five.

Netherlands top the section with four wins and one defeat, with Afghanistan boasting the same record. Denmark are the only team in Group B without a win.

"It was a solid performance to get us off on a roll and we're looking forward to taking on Holland tomorrow," said Coetzer.

"Berrington, MacLeod and Machan all did their job up front with the bat to get us to a decent total. The bowlers then did an outstanding job, probably our best performance in the field of the tournament so far.

"Every time we play Holland there is always a big rivalry, and we'll get going into it looking for plenty of intensity under the knowledge that we need to get a win."