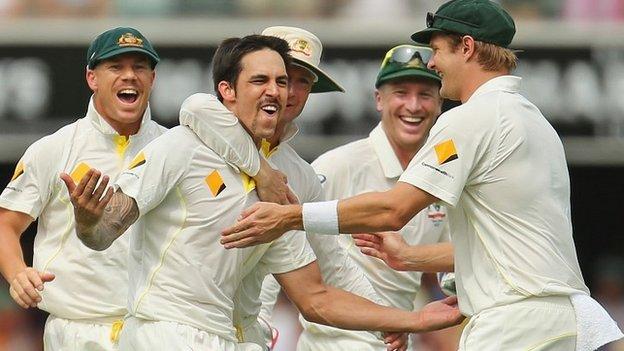 England suffered a calamitous second afternoon as they collapsed from 82-2 to 136 all out to hand Australia total control of the first Test.

Having earlier dismissed the hosts for 295, England lost six wickets for nine runs in 10 extraordinary overs as a rampaging Mitchell Johnson ran amok through the wreckage of their top order.

"Australia were always going to come at England like a bull from a gate and that is exactly what happened. If Australia can keep this up, we could be in for a magnificent series."

Only Michael Carberry with 40 offered any meaningful resistance as Johnson (4-61) and the excellent Ryan Harris (3-28) made the most of some ill-judged strokeplay and feeble defence.

By the close, Australia had added 65 without loss to lead by 224 runs with three full days left in which to push for victory.

Not since Melbourne in 1990, when they lost six wickets for three runs, have England fallen apart in such dramatic fashion.

Three years ago at this ground they ceded a first innings deficit of 221 runs before piling on 517-1 in their second to save the match in style.

But their batting today does not appear to have the form or depth it did in that record-breaking campaign.

They have failed to pass 400 in their last 17 Test innings and, barring a meteorological miracle, are likely to go to Adelaide for the second Test behind in an Ashes series for the first time in seven years.

England had wrapped up the last two Australian wickets in the first hour for the addition of just 22 more runs, Brad Haddin the last man out for 94 after Stuart Broad had taken his sixth wicket of the innings in having Harris caught behind.

That total of 295 appeared well below par on a pitch that looked built for batting, but after a relatively serene start England lost Alastair Cook and Jonathan Trott in a manner that suggested the Australian top order were not the only batsmen struggling with the same issues that bothered them last summer.

Harris was bowling full to England's captain, hoping to draw him into an injudicious push, and with the score on 28 that well-worn tactic paid dividends once again when Cook played with feet rooted and edged to Haddin for 13.

Trott had issues against the short ball in the Ashes series in England, and, as soon as he came in, Johnson was recalled to the attack to test him once again.

The left-arm paceman had been rapid yet expensive in his first six overs, going for 32 runs as he strayed down the leg-side.

But he struck a minute before lunch when Trott moved too far to the off-side to deal with a short one and tickled a clear inside-edge down the leg side to Haddin on 10.

It transformed not only Johnson's mood but the course of the innings.

Kevin Pietersen, in his 100th Test, had already had one life when Peter Siddle dropped a sharp caught-and-bowled chance when he was on eight.

But parsimonious Australian bowling - just 27 runs were scored in the hour after lunch - paid off when Pietersen, having been marooned on 18 for 13 dot balls, tried to thump Harris through mid-wicket and instead picked out a stretching George Bailey.

Carberry played with admirable poise on his return to the Test arena. But after Nathan Lyon tied him down, Johnson roughed him up by coming around the wicket and had him caught in the slips with a rapid one across his bows.

Next to go was last summer's rescue act Ian Bell, fending Nathan Lyon to Steve Smith at short leg for five, before Matt Prior went the very next ball to the same combination.

"What will concern Alastair Cook and his England team as much as this sudden tornado is that, while the magnitude of this collapse is unprecedented for this group of players, the problems in their batting are increasingly deep-rooted."

The Gabba, library-quiet just a few minutes before, was suddenly a bear-pit.

Broad survived the hat-trick ball but Graeme Swann went for a duck, again taken at short leg off a nasty short one, as Johnson's pace and aggression proved too much.

And although Broad (32) and Tremlett (10) briefly halted the carnage, both fell quickly after tea to leave England trailing by a monstrous 159 runs.

Chris Rogers (13) and David Warner (45) then made batting look straightforward again as they settled in against a flat-looking attack.

And Michael Clarke's men will be confident they can take their first Test win in 10 attempts when the pair resume on Saturday morning.