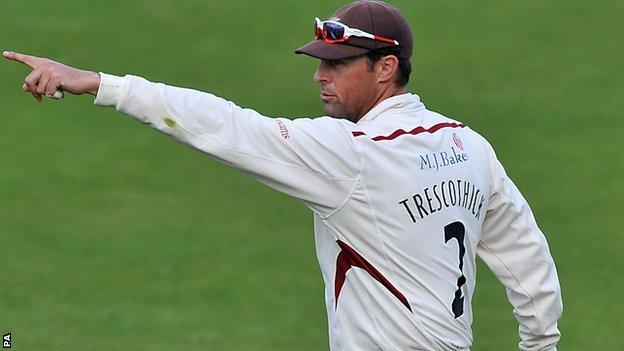 Marcus Trescothick will remain as Somerset captain for the 2014 campaign.

There had been calls for the 37-year-old former England opener to relinquish the captaincy after a poor display with the bat this year.

But Somerset have confirmed he will lead the team out again, in what will be his 21st season in the first team.

"We know Tres cannot carry on forever, and as such we will take stock again at the end of 2014," said director of cricket Dave Nosworthy.

The Taunton outfit also confirmed batsman James Hildreth, 29, will be vice-captain for the season.

"It is a real opportunity for James, as a senior player in the team, to participate fully in team decisions and to further establish himself as a leader in the group," added Nosworthy.

"In the past Hildy has had some captaincy experience and I have no doubt that he will dovetail superbly with Tres - as they together start to form an effective working partnership."

Trescothick, captain for the last four years, failed to score a century for his county this summer for the first time since 1998, and Somerset only narrowly avoided relegation from Division One.

But he insisted: "I have still got that drive to go out and win the games. Leading the team puts that extra bit of pressure on me but also makes it a bit more special when you do well, so the challenge is set.

"We appreciate what we have to do and all the hard work we have to put in."

Keynsham-born Trescothick made his Somerset debut in 1993 and played in 76 Tests for England before announcing his international retirement in 2008 after suffering a stress-related illness.