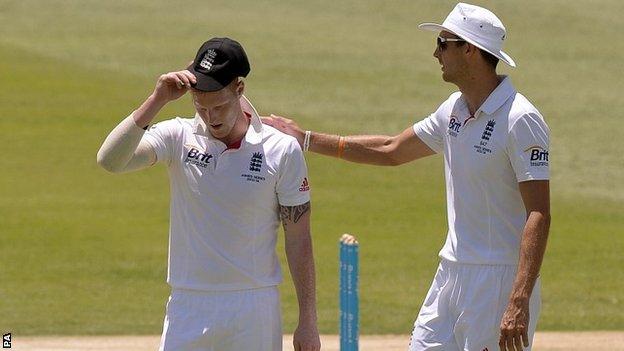 England's final outing before the second Ashes Test drifted to the expected draw as their second-string pace bowlers once again failed to impress.

The Cricket Australia's Chairman's XI reached 254-8 declared on the second and final day in Alice Springs, with Steven Finn ending wicketless and Boyd Rankin taking just one at the death in temperatures that hit 39C.

Graeme Swann took four wickets and Monty Panesar three to provide some optimism from a game that otherwise did little to aid the tourists before they fly to Adelaide on Sunday to resume the Test series against Australia.

"Wicket-taking was Steven Finn's knack but he can't get it together at the moment. He is tall and athletic and yet his bowling - although fast - is just not doing the job."

When England batted again in the final hour, a nominal 42 runs behind after their own 212-7 declared on Friday's first day, Joe Root was caught behind for one before Michael Carberry (37 not out) and Gary Ballance (eight not out) saw them to the close at 47-1.

Swann's figures of 4-56 reflected the opposition's desire to go after him, much as Australia had with success in the first Test at Brisbane, with three of his wickets caught in the deep.

Panesar bowled opener Steve Cazzulino for 48 after Swann had broken the opening partnership of 78 by having Marcus Harris caught by a back-pedalling Finn at mid-on for 49.

The same combination accounted for Michael Hill for 13, but with the ball in hand Finn was too short too often, his 15 overs going for 61 as the Chairman's XI unheralded and inexperienced batsman enjoyed themselves in front of a refreshed crowd in Alice Springs.

For much of this match, the atmosphere was akin to a low-key county game at a festival ground, which made the struggles of Finn and Rankin all the more chastening.

Three years ago Finn was England's leading wicket-taker after three Tests; he was also the second fastest Englishman to 50 Test wickets after Sir Ian Botham.

6-9 Nov: drew with Australia A, Hobart

But his underwhelming tour this time - 11 wickets at a cost of 38.9 runs apiece - and the similarly unimpressive form of Rankin mean that Tim Bresnan is now the clear favourite if England wish to replace Chris Tremlett for the second Test.

Rankin ended with a weary 1-52 on Saturday, his sole wicket that of number nine James Muirhead, to leave him with eight wickets from 88 overs against limited opposition on tour. All-rounder Ben Stokes bowled 13 wicketless overs at a cost of 37 runs.

Josh Lalor was able to compile an unhurried 45 before becoming Panesar's third victim, while Muirhead's 29 came off only 17 deliveries as the second new ball was clouted around the Traeger Park Oval.

England came on this tour with three tall fast bowlers in Tremlett, Finn and Rankin, looking to exploit the hard, bouncy pitches down under as both Tremlett and Finn had been able to on the corresponding tour in 2010-11.

But none of the three men has carried a sustained threat, leaving the door open to Bresnan as he continues his rapid rehabilitation from a stress fracture of the back.

Ballance's 54 in England's first innings here in Australia's Red Centre make him the most likely man to replace Jonathan Trott in the Test side after the experienced number three returned to the UK with a stress-related illness.

Whether he would bat in Trott's position at three or lower down the order is less clear, with Root failing as an opener on Saturday afternoon and Bell unlikely to move up from five.

With Australia coach Darren Lehmann insisting that he will pick his strongest side when the second Test begins at the Adelaide Oval on 5 December, it leaves England with all the selection headaches as they look to fight their way back into the series after the 381-run thrashing at the Gabba.