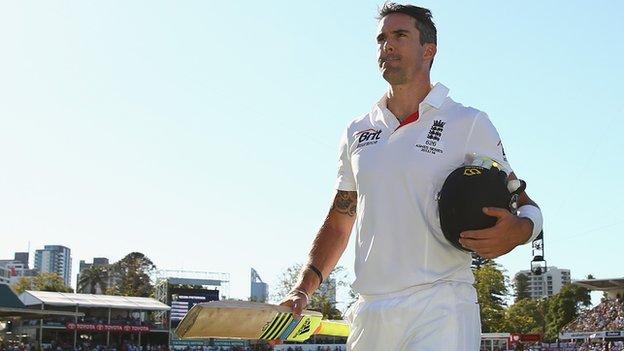 Kevin Pietersen "bottles it" when required to play innings of patience and concentration, according to former England batsman Geoffrey Boycott.

Pietersen faced 59 balls for 19 on the second day of the third Ashes Test before pulling Peter Siddle to mid on.

"When it comes to batting with patience and concentration against disciplined bowling, he just can't do it," said Boycott. "He bottles it."

"We have been here before with Pietersen, and there seems little point in lambasting him once more. It is just the way he plays. That is not said as a compliment, but what else are we seriously expecting from him?"

During the course of his innings, Pietersen became only the fifth England batsman to pass 8,000 Test runs. With 102 caps and at the age of 33, he is both the youngest and fastest England player to the landmark.

Boycott, who himself scored 8,114 runs in 108 Tests, told Test Match Special: "Pietersen is a guy who does some spectacular things for England.

"He is such a fantastic batsman, who plays innings that many of us couldn't play, me included.

"But when it comes to this type of innings, you just know he's going to do something daft."

Poor batting was a contributing factor in England's heavy defeats in the opening two matches of the series and, after the second-Test loss in Adelaide, Pietersen tweeted: "When we win we're quick to take a lot of plaudits. So when we lose, we gotta accept the criticism and I'm totally cool with that!"

In Perth, he took 15 balls to get off the mark - more than any other innings in his Test career - and looked controlled before he fell to Siddle for the 10th time.

"All the time Australia try to get Siddle against him," added Boycott. "His ego, his hubris, his talent, his mental attitude, dictates to him that 'I'm not going to let this guy tie me down'.

"I can only think he needs a player at the other end - whoever it is - to keep going down to him and telling him he's got to stay in, because if we bat until tea time tomorrow, we'll be in the game. But he just cannot do it."

In five innings in this series down under, Pietersen has scored 120 runs at an average of 24. Four of his five dismissals have been as a result of catches on the leg side.

"He is a senior player, he has played over 100 Test matches and his five dismissals in this series have not been good enough.

"He will know that, with the level of performance we have seen from him over the years, especially with this side that has inexperience within it, he is too good a player to be playing shots like he has been playing in this series."

"Sids has tied him down time and time again, and then the release valve comes - and he cracks him open," said McDermott, who took 291 wickets in 71 matches.

"It's working for us at the moment. So we'll carry on, unless he changes his way of batting."

However, England opener Michael Carberry, who made 43, backed Pietersen to continue playing his natural game.

"It's a shot I think many of us have seen him play time and time again, and hit it out of the ground," said Carberry.

"It's disappointing for him, and us. But we want people to play naturally, and I wouldn't want to see Kevin put that shot in the locker."