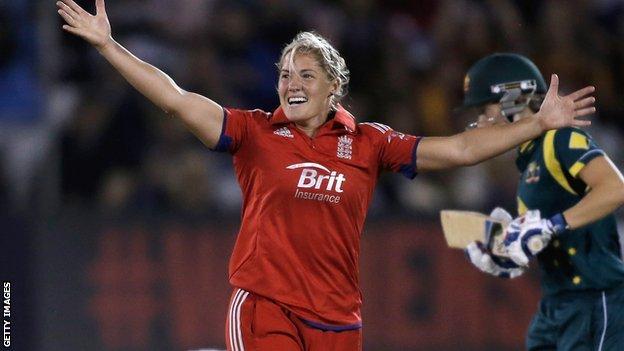 England begin their defence of the Women's Ashes on Friday in the only Test at the Waca in Perth - where the men were thrashed by 150 runs.

Brunt told BBC Sport. "We've got to do it for them, as much for ourselves. It has definitely given us an extra spur."

Brunt, who has taken 31 wickets in eight Test matches, says England will be ready for a fired-up home side.

"The Aussies will come out harder and I think they will come after me," added the 28-year-old. "That could mean I get more wickets.

"It's going to be interesting. I'm not sure we'll change the way we play."

England regained the Women's Ashes at home last summer following the introduction of a new points system, which allows the series to be contested across all three formats of the game.

The Test match, which carries six points for a win and two for a draw, is followed by the one-day and Twenty20 matches, which are each worth two points.

"We won 12-4 at home, but we won't be complacent because a lot of them were close games," added Brunt. "We know they're not stupid enough not to have learned from their mistakes."

Brunt, who missed the tour of the West Indies in October as a result of an ongoing back injury, may be given the opportunity to rest if England make a successful start to their campaign.

But the right-armer from Barnsley, one of the fastest bowlers in the women's game, says she is looking forward to opening the series at the Waca, which traditionally offers pace and bounce for quick bowlers.

"There's nothing better for a quick bowler than seeing the ball carry to the keeper. In the women's game that's quite rare," said Brunt.

"From the men's Test, we saw that it's pretty flat. I will get pace and carry out of it, but there's no margin for error because it is such a good wicket."

England are without the injured Laura Marsh and fellow spinner Holly Colvin, who has opted to take a break from the game.

Those absentees, coupled with conditions at the Waca, could see England employ three pace bowlers, along with the off-spin of Danielle Hazell.

"Both players have been a crucial part of our squad for the last eight years - they have won the Ashes, the World Cup and the World T20," added Brunt.

"They will both be massively missed, but we are behind Holly's decision and Laura need to take some time out of the game to get her shoulder right.

"I guess it suits us that we are going to play on quick tracks because we might have played more seamers than spinners anyway."