These are just a few of the more polite descriptions of England's recent Ashes thrashing by hosts Australia.

"If it was a boxing match it would have been stopped," admitted England captain Alastair Cook after another crushing defeat in Sydney sealed only the third 5-0 whitewash in more than 130 years of Ashes history.

Three times the margin of defeat was more than 200 runs, while the manner in which they succumbed inside three days at the SCG was enough to persuade coach Andy Flower that it was the "end of an era".

BBC Sport compares England's latest demolition with its previous two whitewashes - in 1920-21 and 2006-07 - and crunches the numbers.

We discover, statistically at least, that the 2013-14 tour will go down as the worst in Ashes history. 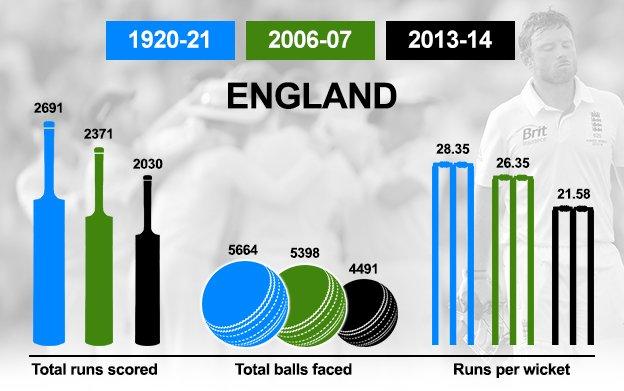 Hard to say. Because of the outbreak of World War I, England had not played a Test for six years and Australia almost nine. However, England began the series in possession of the Ashes and boasted Jack Hobbs, Frank Woolley and Patsy Hendren, who would become the three most prolific batsmen in cricket history.

What went wrong for England?

England were led by Johnny Douglas, an Olympic boxing champion, but he was outshone by opposite by number Warwick Armstrong.

While Warwick Armstrong (left) is remembered as one of Australia's greatest captains, England skipper Johnny Douglas (right) was sacked midway through a series and drowned aged 48 trying to save his father after a boat crash

Aussie Armstrong, nicknamed The Big Ship, stood 6ft 3in and weighed 22 stone. He averaged 77 with the bat, while Douglas was criticised for his dour batting style and was even implored by his own team-mates to take himself out of the bowling attack.

In the era of eight-ball overs when matches were played to a finish, England could not even cling on to the prospect of a draw.

What they said: "Never before in the history of English or Australian trips since Test matches were first played had one side shown such an overwhelming superiority." Wisden Cricketers' Almanack

What happened next? Douglas was sacked as captain the following summer and Australia went on to win the next two series. But perhaps the most lasting legacy was a 12-year-old in the crowd at Sydney being inspired to play for his country. His name? Donald Bradman. 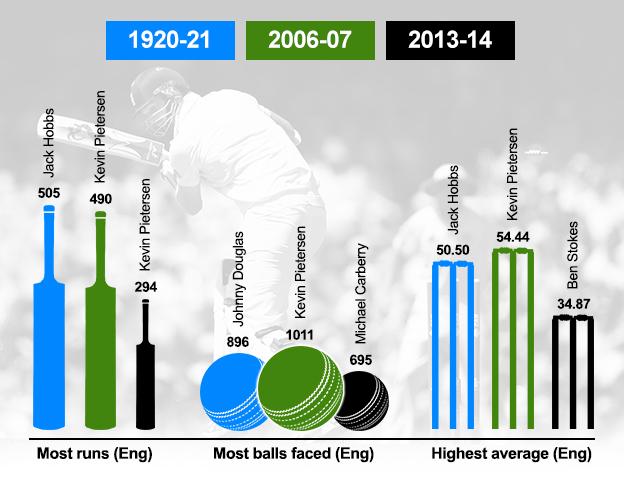 Who were favourites? Although England held the urn after triumphing on home soil in 2005, the fact they had not won in Australia for 20 years reflected the scale of the task ahead of them.

What went wrong for England? What didn't? Captain Michael Vaughan, the scorer of three centuries on the previous tour of Australia, was ruled out by a knee injury and opener Marcus Trescothick flew home before the Test series with depression.

Fast bowler Steve Harmison started the series at the Gabba with a wide that went to second slip, Australia racked up 602-9 declared and never looked back.

But the second Test in Adelaide proved the most damaging for England, who made 551-6 declared and established a first-innings lead yet - paralysed by Shane Warne - collapsed to defeat on the final day.

Adam Gilchrist hit a savage 57-ball century in Perth to underline Australia's total dominance over an England side led by Andrew Flintoff.

What they said: "The story of the first ball would essentially be the story right through to the last. If England won the 2005 series by a nose, they lost the rematch by the length of the Nullarbor Plain." Wisden Cricketers' Almanack

What happened next? Warne, Glenn McGrath and Justin Langer retired after the series, signalling the start of the break-up of one of the greatest teams in history. As for England, Flintoff never captained again and coach Duncan Fletcher left months later. But they went on to win the next three series. Until... 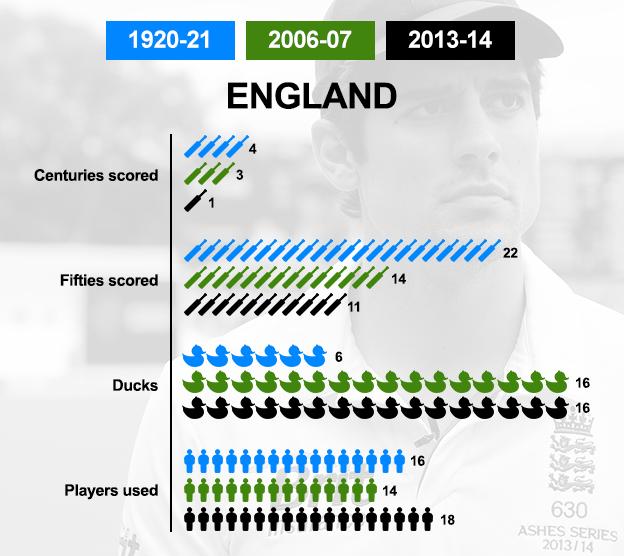 Who were favourites? Played just three months after England retained the Ashes on home soil with a 3-0 victory, the return trip down under was widely seen as a chance to make history with a fourth successive series win for the first time since the 1880s. Australia had lost seven of their previous nine Tests and former England all-rounder Ian Botham predicted a 5-0 scoreline.

What went wrong for England? After making a promising start in Brisbane, when they limited Australia to 295, Alastair Cook's England were shot out for 136 and 179 - the sort of collapse which was to become a feature of the tour.

Jonathan Trott left the tour in the aftermath of a morale-crushing defeat with a stress-related illness, while Graeme Swann's shock retirement after the Ashes were surrendered in Perth further depleted a side that were given a working-over by the Australia players and fans alike.

Aussie fast bowler Mitchell Johnson went from figure of fun for England fans to tormentor-in-chief, claiming 37 wickets at less than 14 apiece as the tourists floundered in the face of express pace.

What they said: "This is a worse loss than 2006-07 because Australia had great players like McGrath, Warne and Gilchrist last time. England have just disintegrated." Former England batsman Geoffrey Boycott

What happened next? Despite calls from some quarters for heads to roll, Cook and coach Andy Flower insisted they had no intention of stepping down. Australia, meanwhile, serenaded their supporters in front of Sydney Opera House.