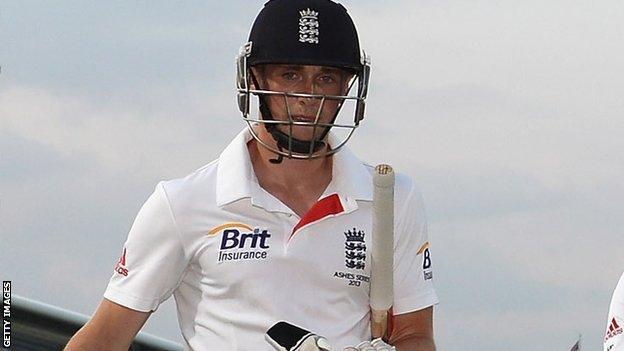 Warwickshire all-rounder Chris Woakes can have a positive impact on the England squad, according to Bears director of cricket Dougie Brown.

Woakes, who made his Test debut against Australia in the summer but was not in the winter Ashes touring party, has been called up for the one-day series.

"He could have been the sort to make a difference," Brown told BBC Sport.

"He's got that determination. He's got the sort of balls that too many of the players have not shown this winter."

He added: "There's a few in that dressing room who will need a bit of bigging up right now."

Woakes, 24, did not make the greatest of debuts with the ball in August, going for 1-96 from 24 overs as the Aussies declared on 492-9 in last summer's final Test at The Oval.

After a useful 25 with the bat in the first innings, he was then on 17 in the second innings and going well when, with just 21 still needed, bad light ended England's hopes of sealing a 4-0 Ashes series victory.

But, along with fellow debutant Simon Kerrigan, he was jettisoned when the various winter tour parties were picked.

Woakes has only just returned from Australia (where he played two Twenty20 matches for Sydney Thunder in the Big Bash either side of Christmas, one of them in the same team as David Warner).

But he now finds himself going back there at a time when England are facing a packed international schedule.

That schedule consists of a minimum 31 limited-over games (depending on how far England progress at the ICC World Twenty20 in March) between Sunday's first one-dayer at the MCG and the end of the domestic season in September - in addition to their seven summer Tests against Sri Lanka and India.

And, as far as his England prospects are concerned, Woakes could yet find his absence from the ill-fated Ashes series turns out to have been a blessing.

"Woakesie could consider himself unlucky not to have been picked in the first place," added Brown. "And who's to say that he might not have made the same sort of impact that Ben Stokes has had?"

England have five ODIs to play against Australia, the last of which is at Adelaide on 26 January.

After that, their next limited-over commitments are three one-dayers and three T20s in the Caribbean in late February and early March.

If Woakes were to keep his place, that would clash with his commitments on a month-long tour to Sri Lanka with England Lions.

Back in mid-December, he was chosen to captain the Lions team in two three-day matches in Colombo against a Sri Lanka Emerging Players XI before three four-day games against Sri Lanka A.

The Lions are scheduled to arrive in Sri Lanka on 27 January, the day after England's final ODI in Adelaide. And, as things stand, Woakes, who is not part of the squad for the three Twenty20 internationals against Australia, is expected to fly straight from Adelaide to Colombo.