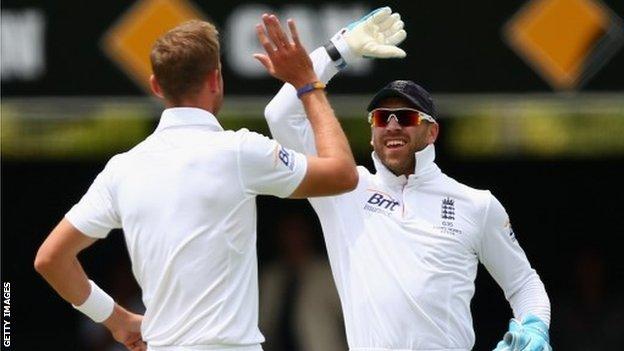 Stuart Broad has praised team-mate Matt Prior after the England players rescued a man who was preparing to jump off a bridge in Sydney, Australia.

The pair found the man on the edge of a bridge in Darling Harbour and Prior spoke to him for about an hour before managing to talk him down.

Broad said Prior was "pretty inspirational" in the way he spoke to the man, adding "I hope the guy is OK".

Wicketkeeper Prior, who has since returned home to England, told the Daily Telegraph: "We were trying to help a bloke who was struggling and in a bad way.

"I look back and I'm just glad we left the bar when we did and we were there for him."

It all happened very quickly and we acted on impulse

Broad and Prior, who both featured in England's 5-0 Ashes defeat by Australia, were returning to their team hotel from a Barmy Army fundraising event when they found the man, who said he was from Cheltenham.

After speaking to him for over an hour, Prior pulled the man down from the bridge before New South Wales police arrived.

"Matt Prior is a best friend of mine and I'm very proud of him. It was a tough situation but so glad he was there," tweeted Broad, 27.

Terry Minish, the team's security officer, was with the England duo and said the man had indicated he wanted to drown.

"Walking back to the hotel we spotted a young man on the edge of the bridge about to jump," Minish said.

"He was saying he just wanted to drown. Matt helped to pull him down off the edge of the bridge and sat with him until the police arrived.

"It all happened very quickly and we acted on impulse. It is what you do in these situations."

"The fact the boys gave the time of day to help someone in need, I think it's an amazing story," he said.