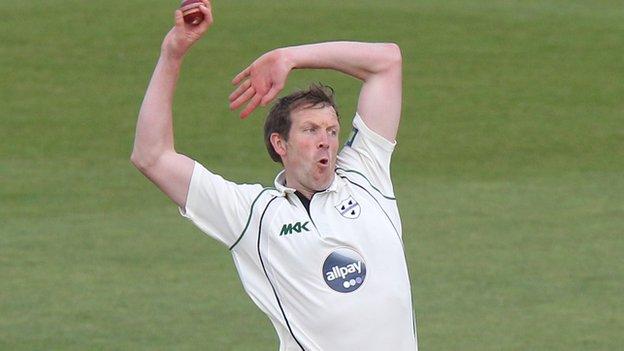 Worcestershire director of cricket Steve Rhodes says that Alan Richardson will be hard to replace at New Road.

The 38-year-old fast bowler shocked the club when he returned to Edgbaston on Monday to rejoin Warwickshire as the Bears' new bowling coach.

But Rhodes is unfazed by the loss of his team's leading County Championship wicket taker for the past four summers.

Rather be a Bear than a Pear?

"Quality players are difficult to replace, but this means a door's open for someone else," he told BBC Sport.

"I'm a person who tends to look at challenges like this in adversity and roll their sleeves up.

"He's gone. Let's move on quickly and see what we've got and who might be available."

"It was a total surprise," Rhodes told BBC Hereford & Worcester. "We can't get away from the fact that we've lost our best bowler.

"You get lucky with some signings. In the four years he had with us he was tremendous - not just on the field but off it too. He's a role model as a professional.

"But, while I know it leaves in a very difficult situation, I can understand Alan's position.

"And it means some of your younger guys are going to get opportunities.

"The guys are nowhere near as experienced or have as much ability but, somewhere down they line, they're going to be good cricketers.

"Fill Alan Richardson's boots? They're too big. But collectively they can.

"There are people waiting in the wings for an opportunity."

Richardson is the second Worcestershire paceman to pack in since the turn of the year, following left-armer David Lucas's decision to end his career.

And Richard Jones, initially signed by Warwickshire on loan at the end of last season, made the same move as Richardson to Edgbaston in November.

But, as things stand, subject to ratification, the Worcestershire attack is set to be significantly strengthened by the return of off-spinner Saeed Ajmal for the 2014 season.