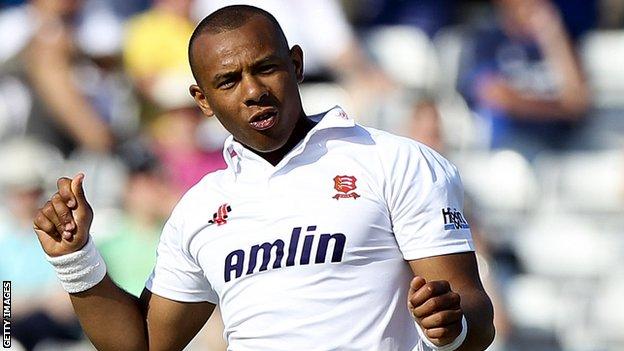 Essex head coach Paul Grayson has said pace bowler Tymal Mills is not ready for a call-up to the England Test side.

"But he needs to play more cricket. We know that's our responsibility and something we'll work on."

Yorkshire-born Mills, who took 11 wickets at an average of 43.36 in first-class cricket last season, regularly bowls over 90mph.

He spent the winter with the England Performance squad and was drafted into the senior side's Ashes training camp to provide the batsmen with practice against left-arm pace bowling.

But Grayson has warned Mills he may not be guaranteed a starting place in county cricket next season, especially if last year's top three wicket-takers, David Masters, Reece Topley and Graham Napier, remain fit.

He said: "Are you going to play Mills ahead of Topley, Napier and Masters early in the season when the ball might be nipping around a bit?

"What we'd like him to do is be more consistent with the red ball and certainly take more wickets.

"If the ECB came to us and said Tymal needs to play more cricket we'd have to look at it, but we're also in the business of trying to win matches for Essex and our other three bowlers Topley, Napier and Masters took 50 wickets each last season - but hopefully he will play a lot more."

Australia's left-arm paceman Mitchell Johnson terrorised England's batsman during the Ashes series as the tourists were embarrassed in a 5-0 whitewash.

Grayson believes Johnson's 37 wickets at an average of 13.9 have left pundits scratching around for an English equivalent.

"The problem is we don't play on fast bouncy pitches in county cricket like those at Perth and elsewhere.

"There's not a lot of fast bowling in county cricket so that's why Tymal's been mentioned," he added.