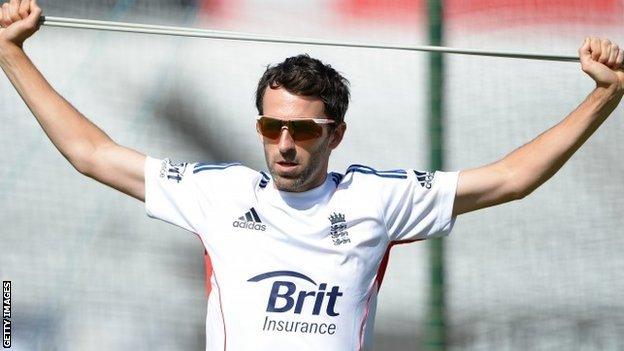 Seamer Graham Onions is determined to return to the England team and says missing the Ashes "hurt like mad".

The 31-year-old was not selected for the series in Australia, which England lost 5-0, despite helping Durham win their third County Championship title in six years in September.

"I've got a burning ambition to play for England," he told BBC Radio 5 live.

"I've been very proud and privileged to play for a very good county. I think my performances potentially deserved another opportunity.

"They picked a squad to take England forward. It hurts like mad but it's up to me to try to force my way into the side."

Onions, who has taken 32 wickets in nine Test matches at an average of 29.90, hopes he can force his way into contention for the home series against Sri Lanka, which begins in May.

He has been playing in South Africa for the Dolphins, coached by former international all-rounder Lance Klusener.

And ex-Durham and England fast bowler Steve Harmison believes Onions can be an asset to the beleaguered England side.

"I think they needed him in the last Test, but they'd gone with the big tall bowlers," said the 35-year-old, who took 222 wickets in 63 Tests for England.

"The players that they picked didn't perform. There will be a clamour for Graham Onions to get picked. He might get a bit of a longer run in the side and hopefully it will make England a better team."

Onions made a superb start to his Test career in 2009, taking five wickets on his debut against West Indies at Lord's.

He also played significant roles both with the ball and as an obdurate tail-ender in the 2009 Ashes series win, and again in the drawn series in South Africa the following winter.

But he was injured on the tour of Bangladesh in March 2010 and a combination of damaged cartilage in his left knee and a hairline fracture of the spine, which both required surgery, kept him out of the entire 2010 domestic season and the 2010-11 Ashes tour.

The seamer was able to resume playing in March 2011 but has appeared in only one Test since, taking 4-88 in the first innings of a rain-affected draw against West Indies at Edgbaston in June 2012.

A special programme reviewing the Ashes, Kevin Pietersen's future and other England cricket issues is available as a podcast on the BBC Radio 5 live website.