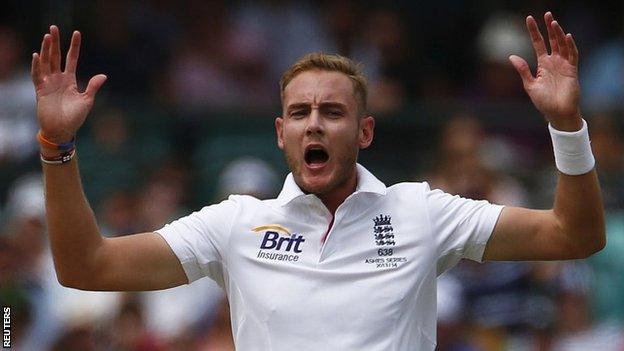 Broad will miss matches in Melbourne on Sunday and Brisbane on 17 January, as well as a tour game against a Prime Minister's XI in Canberra on Tuesday.

The 27-year-old was England's leading Ashes wicket-taker with 21 victims as the tourists were whitewashed 5-0.

Broad will be available for the final three ODIs and will then lead England in three Twenty20 internationals.

His absence leaves England with an inexperienced attack for the opening one-day international, following Graeme Swann's decision to retire and James Anderson having flown home to give him a break.

Tim Bresnan, Steven Finn and Warwickshire all-rounder Chris Woakes, who was recently added to the one-day squad, are now the most experienced seamers available for selection in Melbourne.

But Middlesex batsman Eoin Morgan, one of seven new players to join the one-day squad, does not believe they will suffer a hangover from England's disappointing Ashes display.

He said: "The guys are good. We've had six or seven fresh faces come into the side who have brought a lot of energy, including myself.

"The guys are chomping at the bit to get involved. We've had a bit of time off and young guys coming through are keen to score runs and take wickets - a lot of guys are excited to get this series started."