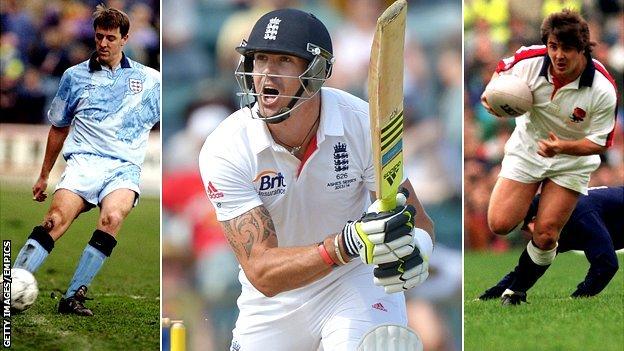 The real wonder of Kevin Pietersen's England career is not that he has endured for so long but that he was picked in the first place. Such is the deep-seated suspicion of the 'maverick' in English sport.

Pietersen, who has played 104 Tests, is proof that a so-called maverick can endure, but he has never stopped being a conundrum.

Pietersen's inclusion in the England squad for the 2005 Ashes series represented an uncharacteristic piece of selectorial risk-taking, especially given that the dependable Graham Thorpe was simultaneously jettisoned.

For many, Pietersen was too South African. Others thought him too capricious. And there was the question of his hair. Despite making 13,797 international runs and being England's highest run-scorer in the depressing 5-0 Ashes whitewash, he remains a deeply divisive figure.

Even David Gower has accused Pietersen of putting his ego before the team. Gower's opinion is particularly noteworthy, not least because the exquisite left-hander once buzzed an Ashes warm-up game in Queensland in a Tiger Moth biplane.

Such Corinthian behaviour suggested Gower's heart wasn't in playing cricket for England, regardless of his thousands of Test runs. Not long after the Tiger Moth incident, Gower's career was gunned down by Graham Gooch, his significantly more prosaic skipper.

Others in the pantheon of English sporting mavericks include Glenn Hoddle, described by Arsene Wenger, who managed the former Tottenham and England playmaker at Monaco, as "the most skilful player I ever worked with", yet dismissed by others as "a luxury"; and former Bath fly-half Stuart Barnes, a suspicious free-thinker in the dogmatic world of English rugby. More of both later.

This distrust of the unorthodox has its roots in the Victorian era, the age of the sporting amateur. As Sir John Gielgud's Cambridge college master made clear to Harold Abrahams in Chariots of Fire, sport was meant to be about the "unassailable spirit of loyalty, comradeship and mutual responsibility". Non-conformists, in the words of Gielgud's character, messed with "esprit de corps".

But it was in the 1970s that the stereotype of the sporting maverick morphed into its modern form, as a direct result of English football's greatest triumph.

Matt Le Tissier was overlooked for England's Euro '92, Euro '96 and World Cup '98 squads. Here are the total caps of some of his midfield contemporaries:

Alf Ramsey took over as England manager in 1962 and it was he who phased out the outdated 'W' formation, with its insistence on fancy-dan wingers who hugged the touchline, in favour of midfielders who attacked through the middle. As such, his England side that won the 1966 World Cup came to be known as 'The Wingless Wonders'.

However, as Jonathan Wilson details in his fine book The Anatomy of England, Ramsey's unshakeable faith in hard graft and discipline and suspicion of flair played a part in his eventual downfall. It also came to define English football.

In the 1970s, when England failed to qualify for two World Cups, a host of lavish talents were viewed as conundrums rather than solutions by successive England managers.

Men such as Alan Hudson, Rodney Marsh and Peter Osgood, who might have been accommodated by more imaginative bosses, became cult figures instead. Nostalgic fans, meanwhile, pined for a charismatic saviour, a man like Stanley Matthews, 'The Wizard of the Dribble', who could stand a foreign full-back on his head wearing hobnail boots.

In the 1980s it was the tireless Bryan Robson who personified English football. A fierce, courageous competitor, Robson revelled in the moniker 'Captain Marvel', while the more cultured Hoddle was nicknamed 'God' by Spurs fans and 'Glenda' by everyone else.

Brian Clough, who no doubt would have made better use of some of the more florid talent at his disposal had he ever been made England manager, said it took "moral courage to play the way Hoddle does".

But many England fans, for whom football was about blood and guts, balls and gumption rather than airy-fairy notions such as technique and vision, saw Hoddle as a hindrance who should tuck his shirt in.

"People talk about character," said Hoddle, "but what is character? Is it tearing around at 100mph? It makes me laugh." The great Michel Platini recognised the character in his kindred spirit, proclaiming that Hoddle would have won 150 international caps had he been born French. Hoddle ended up with 53 and was usually played out of position.

"Glenn Hoddle was probably the most talented footballer I ever saw play," says Matt Le Tissier, who joined Hoddle in the pantheon of mavericks in the 1990s.

"But in England we've always viewed with suspicion anyone who's got a talent that is out of the ordinary. We find it more important to have 11 players who are going to fit into a team pattern, which is going to produce mediocre football, than to take chances on people who have the ability to win you matches.

"England managers weren't prepared to take a chance on the type of player I was. At Southampton, we had a team who were happy to cover up for my deficiencies. But with England, the manager had to take into account other players' egos and the problems that might have caused in the dressing room."

We are English and we are tough on the pitch. Spain are technical; England are brave and tackle hard.

Remarkably, it was Hoddle who ended Le Tissier's international career after only eight caps, dropping him for good after a home defeat by Italy in a World Cup qualifier. Having been stilettoed by a fellow poet, Le Tissier could be forgiven for wanting Hoddle to come back as Carlton Palmer in his next life.

Even more remarkably, some in English football who should know better still haven't grasped that success on the international stage requires a little bit more than grunt and grind and other such traditional English values.

"We have to remember what we are," said Arsenal and England starlet Jack Wilshere last year. "We are English and we are tough on the pitch. Spain are technical; England are brave and tackle hard."

Wilkinson's heroic status is largely down to the central part he played in England winning the World Cup in 2003. But while he is undeniably a fine player, he is also the product of a conservative system.

Sir Clive Woodward is widely portrayed as an innovator but, on the pitch at least, his England side won the World Cup courtesy of a dominant pack, superbly organised defence and the unerring boot of Wilkinson. The unexpected was provided by mercurial winger Jason Robinson, and he came from rugby league.

The tactical conservatism of English rugby union, which is evident even at school level, might explain why England has produced so few outrageous talents behind the scrum, of the type New Zealand churn out year after year.

This might also explain why, when a player emerges with a reputation for doing things differently, English rugby union doesn't know what to make of them.

Enter Stuart Barnes, who was at the controls of most of the great Bath sides of the 1980s and 90s but won only 10 England caps. Because Barnes, like Pietersen, was a conundrum, a problem, a poser. Or, some might say, a poseur.

Meanwhile, England fans were divided into Roundheads and Cavaliers, with Andrew, all modesty and discipline, playing the role of Cromwell and Barnes, exuding pleasure and individuality, as Charles I.

In a case of sport imitating war Barnes, more often than not, got the chop, while Andrew won the hearts of 'Twickenham Man' and 71 England caps to boot.

The row between the Roundheads and Cavaliers could be about to start up again because Owen Farrell, a fine goal-kicker and defender whose attacking nous has been questioned, has been joined in the latest England squad by Bath playmaker George Ford. Once more, the heart and soul of the national team is at stake.

Ford, 20, might be the man who takes England down a road less travelled. Or, like Danny Cipriani in recent times, he might be dabbled with and discarded.

If Pietersen is discarded by England, he will likely spend the rest of his career as a gun for hire in limited-overs competitions across the globe, including the starry Indian Premier League.

And he will no doubt discover, if he hasn't done so already, that one nation's maverick is another nation's genius.