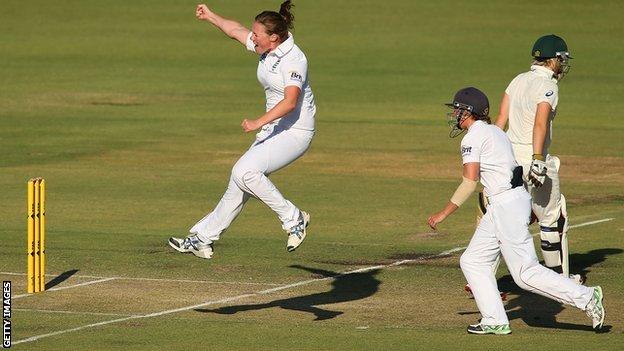 Brindle made 68, sharing a partnership of 64 with Lydia Greenway (22) to help England recover from 32-3.

Shrubsole then removed openers Meg Lanning and Elyse Villani to reduce Australia to 9-2 at the close.

Australia have come out fired up, particularly in the shape of Ellyse Perry, who didn't play well in the summer, and the returning Rene Farrell. But, Arran Brindle showed her experience and Nat Sciver demonstrated her ability to drag England back in the middle of the innings.

Winning the toss in the sole Test of the multi-format series, they opted to make first use of the Waca pitch but were put in trouble by Australia's seamers.

It was left to Brindle to rebuild, first with Kent left-hander Greenway, then in a stand of 58 with Sciver.

But once Brindle, who hit 12 boundaries during her innings, fell to the final ball of the afternoon session, England collapsed.

They lost their last four wickets for 12 runs, with Farrell running through the lower-order and Perry claiming 3-41.

Australia had only six overs to face before the close, but they were unable to resist Somerset's Shrubsole.

Villani slashed to Knight at first slip in the second over before Lanning edged to wicketkeeper Taylor, as the Southern Stars closed 192 runs behind.

"We always backed ourselves to take a couple tonight. It sends out a message to the opposition and shows what we were about," said Brindle.