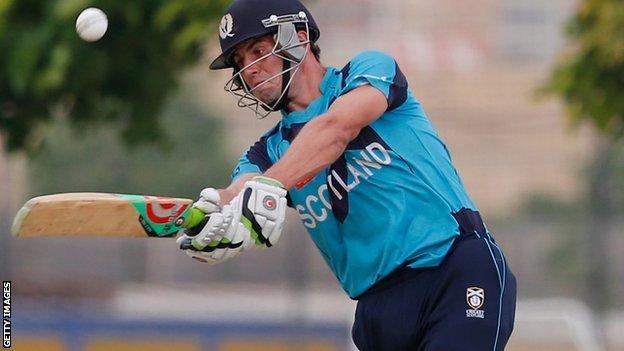 Coach Craig Wright says it would be "foolish" to assume Scotland will progress from Group A at the 2015 World Cup qualifiers in New Zealand.

The Scots face Hong Kong, Nepal, United Arab Emirates and Canada in the group phase of the tournament.

"These are teams that finished ahead of us in the T20 qualifiers before Christmas," Wright told BBC Scotland.

"So there's no doubt that we will not be taking any team we play against lightly at all."

Ten teams are split into two groups of five, from which the top three in each progress to a 'Super Six' stage. The best two sides secure the two remaining spots at the 2015 Cricket World Cup in Australia and New Zealand.

In his playing days, Wright captained Scotland to winning the 2004 Intercontinental Cup and the 2005 ICC Trophy.

"It's very much a case of trying to do everything we can to make sure that we get back to where we were 10 years ago," said Wright.

"I'm absolutely convinced we've got players who are skilful enough and work hard enough to do that."

They have another warm-up match against Namibia on Saturday before their first Group A game versus Hong Kong on Monday.

Collingwood has said he would welcome involvement in England's coaching set-up following their miserable Ashes series in Australia.

But Wright is convinced the former Durham man will fulfil his role with Scotland in New Zealand before any potential switch.

"We've talked about it and he's certainly had a few journalists on the phone," Wright added.

"But he's very focused and committed to what he's doing with us at the moment and I'm sure he'll see that through.

"I'm just focused on doing the job as best as I possibly can do this month. Whatever happens after that, we'll wait and see."