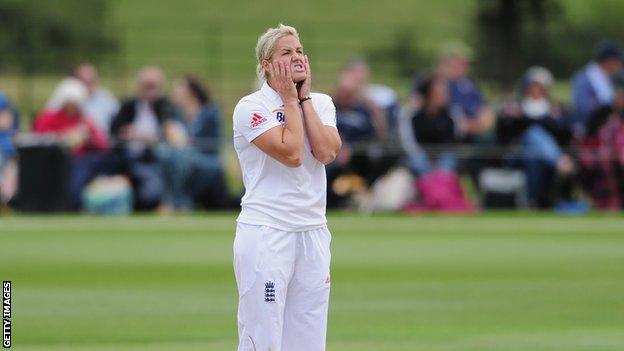 England suffered a frustrating second day of the Women's Ashes Test after Australia fought back in Perth.

Resuming on 9-2 in reply to England's 201, Australia slipped to 37-5 with Lancashire's Kate Cross taking two of the wickets on her Test debut.

But without fast bowler Katherine Brunt in the attack - she was removed for bowling two dangerous full toss beamers - Australia recovered to reach 207.

To cap a disappointing day for England, who are trying to defend the Ashes they won at home last summer, they also had to manage without captain and opener Charlotte Edwards for the second half of the day.

Edwards failed to take the field after injuring her knee fielding during the second session and will not be able to bat until England are five wickets down.

Cross had given England a flying start by claiming the first two wickets of the day, before Brunt dismissed Sarah Elliott.

But with Brunt being no-balled for a second head-high full toss, ruling her out of bowling for the rest of the innings, Australia recovered with Jodie Fields (43) and Ellyse Perry (71) adding 55 for the sixth wicket.

Fields became Cross's third victim when she was brilliantly caught by Jenny Gunn, but Perry advanced to her maiden Test half-century and helped forge an 85-run stand with Erin Osborne (40).

Pace bowler Anya Shrubsole wrapped up the tail to finish with 4-51, but by then Australia had claimed a narrow six-runs first innings lead.

This series is multi-format, with six points being awarded for winning the Test and two points awarded to the winners of each of the three one-day and Twenty20 matches. The team that accrues the most points across all three formats will win the series.