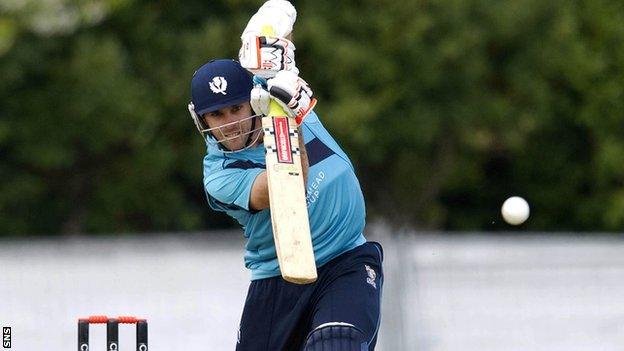 That win followed Friday's seven-wicket triumph against Papua New Guinea, having made 174-3 from 27.1 overs.

for the qualifying event in New Zealand.

Scotland, who are being following the , take on Hong Kong on Monday.

There are two places at the finals in Australia and New Zealand up for grabs.

And captain Kyle Coetzer believes the Scots should approach the qualification campaign with confidence.

"They [Hong Kong] have got a good side and we've just got to go there being very positive and believe that we're the top side in that group," he told BBC Radio Scotland's Sport Nation programme.

"If we didn't go there thinking that, it would be wrong. I think we've got to go there very positive, very confident to try and come out on top of that group to get through to the super six stage.

"Hong Kong have got quite a dangerous line-up. UAE are a much improved side. Nepal qualified for the T20 World Cup so there's some very good sides there. They're not push-overs by any means but we've still got to believe that we're capable of taking them on in a 50-over format.

"The guys have been playing cricket long enough now, the team runs itself. The guys are all big enough and old enough now to know how to get their best results out of their game and that's what we've tried to do; put the onus on the players.

"It's us that have to put the results in.

"There are big things at stake here: World Cup qualification and pride. We want to do this, not only for ourselves, but also for the whole of Scotland.

"It's an honour to be here doing it for your country and we'll be doing everything we can to come out the other end of it."