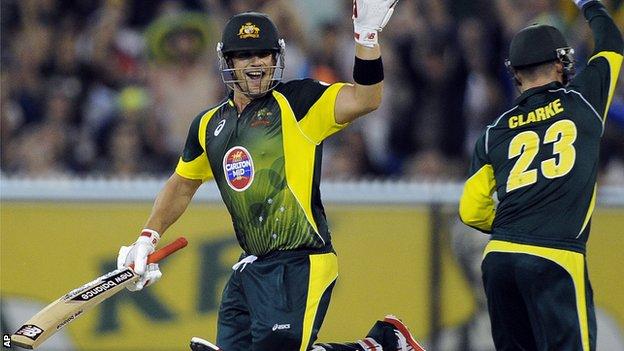 Australia's hold over England continued with a six-wicket win in the first one-day international in Melbourne.

Opener Aaron Finch hit 121, after being dropped on eight, as the hosts reached a target of 270 with 26 balls to spare.

Having elected to bat, England posted 269-7 off 50 overs with Eoin Morgan and Gary Ballance scoring half centuries.

"Let's hope for better in Brisbane. This squad has only been together for six days as a group - they've been totally outplayed today, and one thing they're going to have to look at is playing a specialist spinner, whether that's Danny Briggs or James Tredwell, because there was no variation in the attack. You need specialist bowlers in there who perform for their counties day in, day out. Australia may have left their entire Test bowling attack out, but England have left players out - I think they missed Anderson and Broad today."

But Finch and David Warner seized the initiative with an opening stand of 163 to set Australia on the way to victory in the first of the five-match series.

Finch, 27, was given an early let-off when he was dropped at mid-off by Ballance, off the bowling of Chris Jordan, and he made the most of the chance to record his second one-day international century.

He also become the first player from Victoria to score a one-day international hundred at the Melbourne Cricket Ground with a 128-ball innings which contained 12 fours.

Warner, who was outscored by Finch early on, was also given a second chance after initially being given out caught behind when on 22.

The batsman had a word with England wicketkeeper Jos Buttler after edging a Ben Stokes delivery and was walking off the pitch but umpires Ranmore Martinesz and Simon Fry referred it to TV umpire Kumar Dharmesena, who ruled that the ball had bounced before being caught.

The Australia pair took advantage of their good fortune, setting a new national record for the first wicket against England in ODIs before Warner was caught by Stokes on the boundary off Joe Root's part-time off-spin.

Shane Watson lasted just four balls before being bowled by Chris Jordan but Finch and Australia captain Michael Clarke added 72 for the third wicket to settle any nerves.

Finch was finally caught by Ballance, off Stokes, and Clarke reached 43 before being caught by Alastair Cook off the bowling of Bresnan but Australia were just 23 runs from victory.

Earlier, England captain Cook won the toss but he was out in the first over, caught by wicketkeeper Brad Haddin off Clint McKay.

Ian Bell's dismissal when bowled by Xavier Doherty saw England reduced to 62-3, but Morgan and Ballance gave hope of a competitive total with a stand of 83.

Morgan provided the impetus, making 50 off 46 deliveries, but having reached his milestone the Ireland-born left-hander was dismissed by his next delivery when he pushed Maxwell to Nathan Coulter-Nile at extra cover.

Ballance, who made his Test debut in the final match of the 5-0 Ashes whitewash, gradually asserted himself to post his first 50 for England in his second one-day international as he hit a solid 79.

England hit 86 runs from the final 10 overs of their innings with Buttler's 34 not out and Bresnan's unbeaten 16 both coming at quicker than a run-a-ball.

However, the target soon began to look inadequate as Finch and Warner set about a bowling attack lacking the rested Stuart Broad or James Anderson.