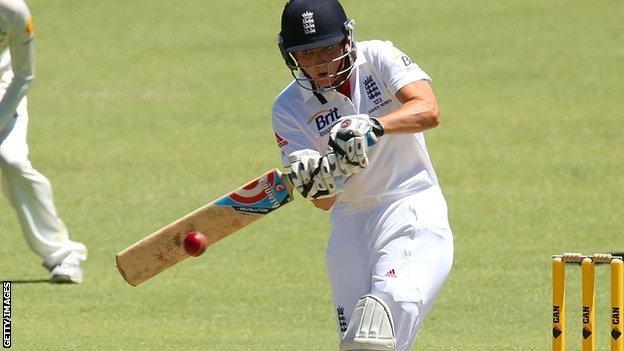 England reduced Australia to 57-5 after setting the hosts 185 to win the Women's Ashes Test in Perth.

The tourists resumed day three on 18-3 but staged a recovery, with Arran Brindle (35) and Natalie Sciver (23) shared a 54-run partnership.

But it took a determined captain's innings by Edwards - her ninth at Test level - to put her side back in the game, after she was forced to bat down the order at number seven because she had spent time off the field with a knee injury on day two.

The hosts reached 28-0 before pace bowler Katherine Brunt had Elyse Villani, who hit 21 from 22 balls, caught by Sciver at second slip.

The experienced Alex Blackwell lasted only five balls before she was also caught behind off the bowling of Cross for a duck.

Southern Stars skipper Jodie Fields was stumped by Taylor off the bowling of Gunn to leave Australia reeling and still 128 short of their target heading into the fourth and final day.

Sarah Elliott, who had scored five from 53 balls, was at the crease with Ellyse Perry at the close.