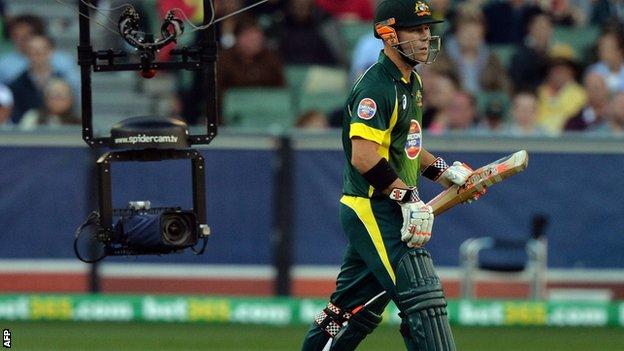 Warner was recalled to the crease after being initially given out caught behind for 22 in Australia's successful chase of 270 to win in Melbourne.

"It might be my English eyes on it, but I thought it was a pretty clean catch," said Cook.

"It hit his fingers and bounced up. I only saw it a couple of times on the big screen and I thought it was the wrong decision."

Warner began to walk off after speaking to England keeper Jos Buttler following his edge off a Ben Stokes delivery, but umpires Ranmore Martinez and Simon Fry referred it to TV umpire Kumar Dharmasena, who ruled that the ball had bounced before being caught.

"Obviously David thought it has carried because he was quite happy to walk off," Cook added.

"It is strange because a lot of those catches look a lot worse on TV than they do in real life. With that one, I didn't see it hit the ground, but we have to respect the umpire's decision."

Cook also admitted that his side are struggling to end their run of defeats following the 5-0 Ashes whitewash.

"We are struggling to find the answers for a lot of these questions," Cook told BBC Radio 5 live sports extra.

"All I know is that if we keep working hard it does eventually turn. We have got to keep believing in ourselves to keep doing that and keep backing ourselves, otherwise we certainly won't win games of cricket."