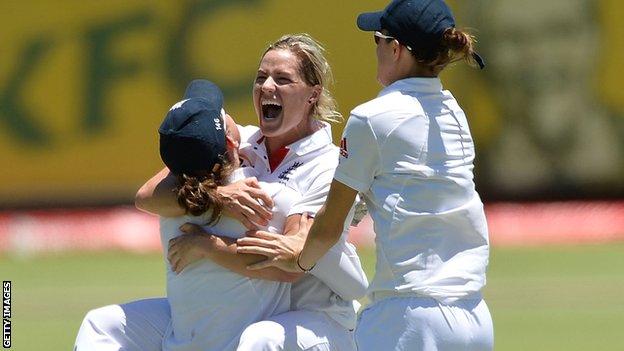 England took a big step towards retaining the Women's Ashes by winning the one-off Test by 61 runs.

Australia began the final day on 57-5, needing 185 to win, and Ellyse Perry (31) hit an early flurry of boundaries.

But she fell to Anya Shrubsole (3-48), who tore through the tail to wrap up the victory before lunch.

The win in Perth earns them six points in the multi-format series, and they only need to win two of the six limited-overs games to keep the trophy.

It also restores some pride in English cricket after the men's team suffered a 5-0 whitewash by Australia in the Ashes and were thrashed in the first one-day international on Sunday.

After she had taken 4-51 in the first innings, it was something of a surprise that captain Charlotte Edwards waited until the eighth over of the morning to bring Shrubsole into the attack, by which time Perry and Sarah Elliott (29) had already taken the Southern Stars to 96-5.

But her introduction proved Australia's undoing as Shrubsole began with two maiden overs to Elliott, and with fellow seamer Jenny Gunn applying the brakes at the other end, Perry perished in Shrubsole's third over of the day as she chipped a catch to Gunn at square leg.

The Somerset right-armer's next over brought another wicket as Erin Osborne got a leading edge and was caught at mid-off by substitute fielder Danielle Wyatt without scoring.

Gunn trapped Sarah Coyte lbw with the fourth ball after a drinks break, and with Elliott trying to farm the strike, Shrubsole bowled Rene Farrell - who became the ninth player of the match to have a duck symbol placed against her name on the Waca scoreboard.

"I have to feel sorry for Australia. They have toiled hard and they will know that they gave it everything. The fact that it got so close will be playing on their minds.

"But it was a wonderful effort by England. This morning, when Ellyse Perry was so positive with the bat along with Sarah Elliott it took a breakthrough to create more wickets and that last delivery from Katherine Brunt was exceptional."

It had been an unhappy game for Shrubsole's new-ball partner Katherine Brunt, who had been removed from the attack in the first innings for bowling high full tosses, and was hit for 11 by Perry in her opening over on the final day.

But Edwards's faith in the Yorkshire pace bowler was rewarded when Brunt returned with one wicket needed - and ended Elliott's long resistance with a superb inswinging yorker which clipped her leg stump and sealed the victory.

"The last four days have been a rollercoaster, but I'm really proud of the girls," said Edwards.

"This is not the Ashes won - but we have to keep working hard and hopefully will take the Ashes home."

Perry's all-round performance - 71 and 31 with the bat, and match figures of 8-79 - earned her the player of the match award.

After a warm-up game against a Representative XI on Friday, England play the first of the three one-day internationals in Melbourne on Sunday.