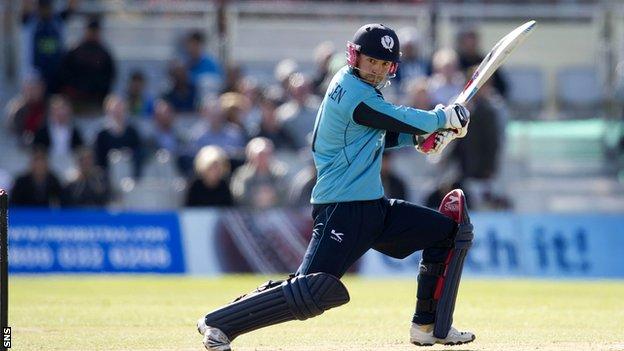 Scotland lost their opening World Cup qualifier against Hong Kong by 17 runs despite a century from Preston Mommsen.

Matt Machan (34) and Rob Taylor (28) were the only batsman to offer any support for Mommsen, who was last out.

Scotland play Nepal on Thursday as they continue their bid to reach next year's World Cup in Australia and New Zealand.

The Scots opted to bowl after winning the toss and made an early breakthrough after just three overs when Safyaan Sharif ran out Mark Wright for just one.

But Hong Kong recovered, largely thanks to opener Ahmed, while Tanwir Afzal chipped in with 42 and Mark Chapman reached 36.

Skipper Kyle Coetzer and Calum MacLeod fell to Haseeb Amjad, as the Scots slumped to 33-2 in reply after eight overs.

Mommsen and Taylor put on a fifth-wicket partnership worth 50 but after the Leicestershire all-rounder was caught by Jamie Aitchinson, the Scots were back in trouble.

Mommsen completed his ton from 102 deliveries, but could only look on as wickets continued to tumble at the other end.

A ninth-wicket stand of 50 with Majid Haq did get Scotland to within touching distance but their hopes of victory ended when Mommsen was caught by Atkinson from Nadeem Ahmed's delivery.

"Our performance wasn't good enough and we fell short of the standards we set ourselves in each discipline," Coetzer told the Cricket Scotland website.

"Preston showed the way on his return from injury and made a magnificent hundred which got us close. Unfortunately nobody was able to stay with him long enough to get us over the line.

"It is clearly not an ideal start to the tournament but our aim will simply be to play better in the next game and take it from there."