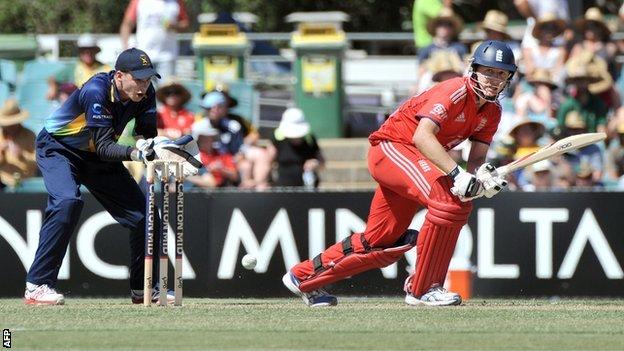 England beat a Prime Minister's XI by 172 runs for a first win in Australia for two months, but captain Alastair Cook again failed with the bat.

Cook was caught behind for one off 37-year-old Brett Lee, who trapped Joe Root lbw as England slipped to 149-6.

The Prime Minister's XI then collapsed to 92 all out, with Ravi Bopara claiming four wickets.

"It's great to win; it's been a long time coming," said Cook. "It's very important because we need to start winning.

"We have a huge amount to work to do, but it's a step in the right direction."

Beating an inexperienced side with little batting depth is far removed from the challenge England will face in the second one-day international in Brisbane on Friday, but it at least halts a run of six defeats in seven matches across two formats of the game.

The form of the tourists' top order remains a concern, though, with Cook falling in the first over of the match, just as he did in the six-wicket defeat by Australia in Sunday's opening ODI.

Edging behind as he fenced at a short delivery from Lee, who retired from international cricket in July 2012, Cook continued a run which has seen him score only 19 runs in his last four innings.

Root, who also looked out of sorts in Melbourne on Sunday, was pinned on the back foot by Lee to fall for one from 14 balls.

Michael Carberry - included in place of Ian Bell - rebuilt with Gary Ballance, who followed up his 79 at the MCG with another half-century.

However, Carberry top-edged Ben Cutting to Lee at mid on for 47, and the England middle order succumbed to leg-spinner James Muirhead, who claimed 3-52.

Eoin Morgan and Bopara fell cheaply before Ballance became the sixth wicket to fall, leaving England in danger of subsiding.

Buttler, though, combined with Bresnan to ensure England avoided embarrassment, hitting four fours in his 60-ball stay to take the tourists to what would prove to be a more than adequate total.

Chris Jordan and Boyd Rankin made early inroads with the ball for England, Jordan bowling Peter Handscomb and Rankin having Luke Pomersbach and Ben McDermott caught behind.

From 24-3, veteran Brad Hodge resisted for a short time but, when he was caught on the mid-wicket boundary off James Tredwell, it sparked a collapse of five wickets for 19 runs.

Lee was the last wicket to fall, bowled by Bopara, who ended with figures of 4-3 from three overs.