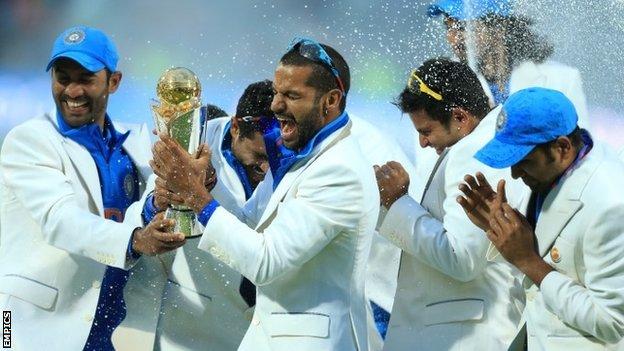 The MCC World Cricket Committee fears the ICC Champions Trophy could be revived at the expense of the 2017 World Test Championship.

The 2013 Champions Trophy - - was supposed to the final tournament, but a lack of interest in the 2017 WTC could see it return.

"Not having the World Test Championship would feel like a diminution of Test cricket," said former England captain Mike Brearley, who is chairman of the WCC - an independent cricket think tank established in 2006.

"It would mean another one day trophy is considered more important, and symbolically and realistically that would not be a good thing."

The International Cricket Council had planned the WTC, involving the top four teams in its Test rankings playing in a knockout tournament, to start in 2013 but this was shelved because of a lack of "support and consent" from the ICC's commercial broadcast partner.

and the WCC has suggested that, if it is not possible for four teams to compete, then the top two countries should at least face each other in the WTC.

"We are slightly worried about the World Test Championship," Brearley told BBC Sport.

"The ICC came round, in some quarters, a bit reluctantly to supporting the idea but since doing so they have confronted various problems.

"Secondly, the broadcasting revenues from a Champions Trophy tournament would be more assured than the fees from a Test Championship.

"Thirdly, it would be quite difficult to have a complicated tournament in England in 2017 because of the number of Test matches already being played there.

"Also there would be a difficulty of scheduling and promoting a final when you don't know who is going to be in it.

"What we really in effect are saying is, if there can't be what would be the best thing from our point of view - namely a build up to a final - let there at least be a final.

What is the MCC World Cricket Committee?

"A play-off between the two top ranked teams at the end of each four year period would be much better than nothing. It would give some context to the rankings, Test cricket and each Test match."

Brearley rejected the notion that the WTC would just cause another headache in an already crowded cricket calendar and complaints of player exhaustion.

"I don't think anyone is going to complain about such a big event at the end of each four year cycle," he countered.

"I don't think the Premier League players complain about too much football if they get to the Champions League final.

"It's a pretty big thing and you hope something like that would happen in Test cricket."