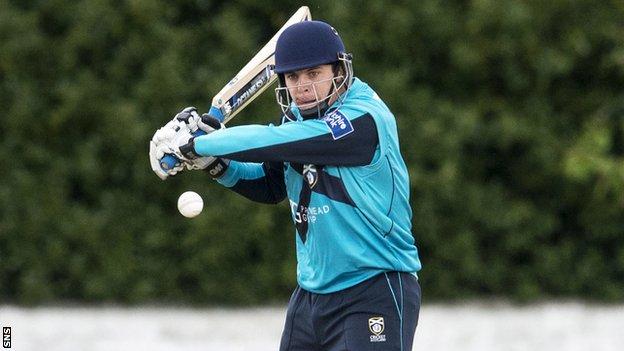 Scotland bounced back from their opening World Cup qualifying defeat with a 90-run thrashing of Nepal.

The Saltires, who lost to Hong Kong earlier this week, were helped in New Zealand by Freddie Coleman's 64 not out to set Nepal a target of 250.

Nepal captain Gyanendra Malla provided some resistance as he top-scored for his side with 34.

But Iain Wardlaw and Rob Taylor both claimed three wickets as the Scots coasted to victory.

Coleman gave the Scots added impetus in his 67-ball knock with four fours and a six, while Safyaan Sharif's unbeaten 25 from 17 balls bolstered Scotland's total.

Nepal's chase got off to the worst possible start when opener Sagar Pun was dismissed off the very first ball, caught behind off left-armer Rob Taylor,

Malla provided resistance with a knock of 34 as did Sharad Vesawkar (30) and Prithu Baskota (21) but the Scots dismissed them for 159 to secure a comfortable victory.

Coetzer was happy with the qualifying win but believes his side are capable of better performances,

"A good solid performance today but there are still areas we know we can still improve," he said.

"Our disciplines with the ball were very good and our efforts in the field were much closer to where we expect them to be."