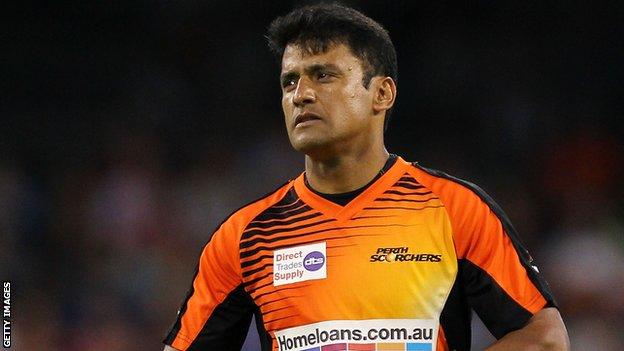 Sussex have signed Pakistan all-rounder Yasir Arafat as an overseas player for the T20 Blast tournament.

The 31-year-old has previously had three spells at Hove and is fifth on the all-time Twenty20 wicket-takers' list with 219 scalps.

"It's been going on since October. We have managed to get there in the end and it is great news," Sussex cricket manager Mark Robinson told BBC Sussex.

"We get a very experienced bowler. He is a calm man who takes pressure well."

He has turned out for five different English counties - Sussex, Kent, Surrey, Lancashire and Somerset - and is the leading wicket-taker in the history of domestic Twenty20 in England.

Arafat, who has played three Tests, 11 one-day internationals and 13 T20 internationals, has appeared in the short format for club sides in Pakistan, New Zealand, South Africa and Bangladesh.

The Rawalpindi-born right-hander, who is currently representing Perth Scorchers in the Big Bash League in Australia, has taken his 219 wickets at an average of 20.98 in 171 Twenty20 appearances.

"He had a great time at Somerset last year and did really well for them," Robinson continued.

"The nature of Twenty20 cricket is any player on any day can have a bad game. What you know with Yasir is he is proven over time.

Yasir probably hasn't quite got the nip that he had in that first spell [in 2006] but he is cleverer, more experienced and uses those qualities really well

"The odds of probability are more stacked in his favour of him doing well than the other way around.

"We know Yas and he is a lovely, lovely man."

Arafat will be available for Sussex for the whole of the T20 Blast group campaign, which runs from mid-May until late July.

"We were the first club that gave Yasir a break," Robinson added. "He was playing in Scotland and a bit unknown.

"He plays less four-day cricket now and is really a specialist in Twenty20. That has extended his career.

"He probably hasn't quite got the nip that he had in that first spell [in 2006] but he is cleverer, more experienced and uses those qualities really well.

"From our point of view it is hard getting the overseas players over three months now. He's now married an English lady who lives in Kent and he will be local to us.

"It feels a really lovely fit and we are really excited."