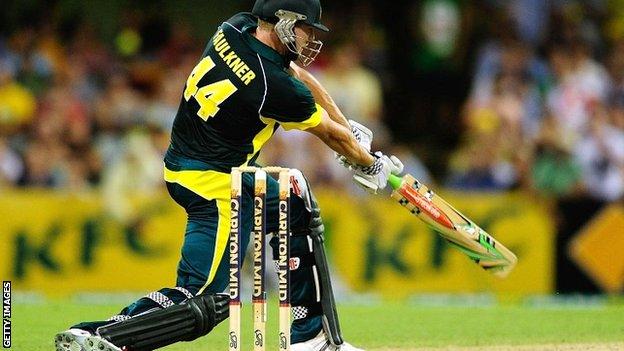 James Faulkner fired an unbeaten 69 as Australia recorded an extraordinary one-wicket win over England in Brisbane to go 2-0 up in the one-day series.

It was England's eighth successive defeat against Australia.

For England, with only two victories against modest representative opposition on this tour, the mental scars of a 5-0 Ashes whitewash can only have deepened after this crushing reverse.

When the penultimate wicket was taken, 57 were needed from the final six overs but Faulkner, who posted Australia's fastest one-day international century against India in November, launched the next two deliveries from Ben Stokes for six.

Remarkably he was booed by the crowd for failing to take a single in the penultimate over but he dispatched two more consecutive sixes off Stokes to leave 12 needed from the final six balls, and only three were required as three fours came off Tim Bresnan.

The unchanged tourists began confidently enough after opting to bat, with their highest ODI opening partnership at the Gabba, as skipper Alastair Cook (22) and Bell added 57.

Three wickets fell in six overs and Morgan, who averages 30 in Test cricket and made the last of his 16 appearances in February 2012, had made only a single when he appeared to have a reckless swipe at Michael Clarke's left-arm spin and was caught in the outfield.

But the left-hander had astutely observed that only four fielders were present inside the 30-yard circle rather than the requisite five - effectively resulting in a free hit - and informed umpire Kumar Dharmasena that a no-ball should have been called.

"Bad luck England. I don't know how they lost it. I thought it was a fait accompli with 10 overs to go. But England just didn't have two bowlers who could bowl at the death and it was an amazing effort from Faulkner.

"England put up a good show. They have got to stay strong because they are still in this series."

He accumulated steadily to add 61 with Bell, who played in assured fashion for his 28th ODI half century until attempting a suicidal single to Clarke's left hand at short cover in the 30th over.

However, the innings was transformed by Morgan and Buttler, who shared 113 in 68 balls, with 90 scored in seven overs.

Morgan struck Mitchell Johnson off the front foot for an imperious six over extra cover and reached his sixth ODI century in typically innovative fashion by deflecting a bouncer over the wicketkeeper's head for four.

It appeared as if England would fall short of 300 when three wickets fell in five balls but a Buttler stroke off Johnson in the 48th over that was prevented from going over the ropes by Shaun Marsh at long-off and originally credited as two, was corrected to a six during the interval.

Gary Ballance, who dropped centurion Aaron Finch in the opening match, nonchalantly dismissed him for a duck with a one-handed take at mid-off and the destructive David Warner was sensationally pouched by Jordan in his follow-through.

Yet Australia remained well ahead of the required rate, Brad Haddin joining Glenn Maxwell (54) in a partnership of 80, before both were caught in the same Bresnan over as England looked set for a morale-boosting win.

However there was still Faulkner, and he pummelled England's inexperienced attack to share 57 with last man Clint McKay - whose contribution was two from nine balls - in an even more dramatic resurgence than on the first day of the Ashes at the same ground, when Australia rallied from 132-6.

England have never won a five-match ODI series from 2-0 in arrears and face their next challenge in Sydney on Sunday.