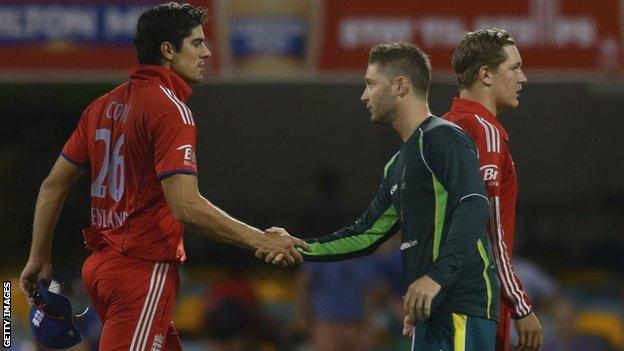 Cook's side trail Australia 2-0 in the five-match series following a one-wicket defeat in Brisbane on Friday.

"I think if Alastair re-ran it again, the last part of that game, he may do things differently," said Thorpe.

"Do we need to change things? That's what we're trying to find out."

England's team selection and bowling tactics, and Cook's captaincy, came under scrutiny at the Gabba as their bowlers - without a front-line spinner in the side - took some heavy punishment.

Australia, chasing 301 to win, recovered from 120-5 and 244-9 as James Faulkner's unbeaten 69 from 47 balls dominated a last-wicket stand of 57 with last man Clint McKay to rescue a seemingly lost cause.

Ex-England batsman Thorpe explained: "We haven't had a big meeting about it, but come tomorrow [Sunday] we have to look at the side which we pick.

"It's not just the immediate series, which is not lost.

"Part of this is learning about players and can they stand up in this environment and perform? That's what we have to find out on this trip, for our planning when we come back."

England will be boosted by the return of pace bowler Stuart Broad, rested for the first two ODIs, for Sunday's match, and Thorpe confirmed that there are likely to be be further changes made as they continue to search for a winning formula against Australia.

The Aussies' latest successes against England follow the 5-0 Test whitewash of their rivals in the Ashes.

And Australia wicketkeeper Brad Haddin is hopeful that Friday's victory will pave the way for them to win the series on Sunday.

"We're hoping we can open a few more scars a bit wider and finish it off in Sydney," Haddin said.

"We were in a position on Friday where England batted, bowled and fielded better than us and we won the game.

"We'll take a lot of confidence out of that. People say winning is a habit and so is losing. I think that was no more evident than on Friday."

For England to break the losing habit, Thorpe says they need to be mentally strong in Sydney.

"The game comes again on Sunday. If we're not in the right state of mind it will be a tough game for England," he continued.

"It's not the time for us to sulk and feel sorry for ourselves. We have to stand up and keep going forward.

"I think if we can stand up and actually win Sunday's game, it would be an enormous achievement and show enormous strength in the side.

"We have to demand that from the players. When you put on an England shirt that's what you have to do."

Meanwhile, England have added Sussex pace bowler Chris Jordan to their Twenty20 squad for the three match series against Australia which starts in Hobart on 29 January.