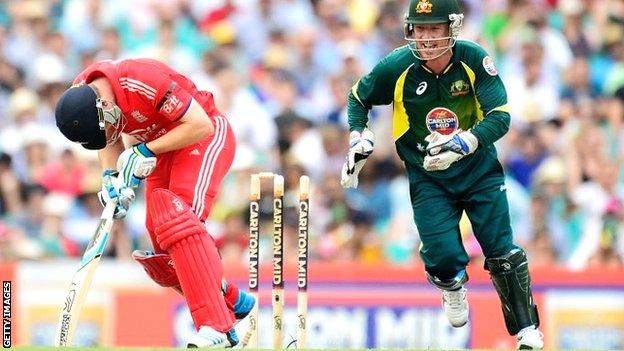 Australia added the one-day series to their Ashes whitewash against England, taking an unassailable 3-0 lead with a seven-wicket win in Sydney.

It was England's ninth successive loss in various formats against Australia.

But the end result was the same and an unprecedented double 5-0 whitewash remains possible.

Skipper Alastair Cook at least improved his record with the coin, winning his third successive toss, and he looked excellent with the bat in a discernibly more positive start to the innings.

Australia left out Mitchell Johnson and Cook capitalised, driving James Pattinson over cover for four and hooking Nathan Coulter-Nile for six as five boundaries came in the first five overs, as many as England managed in the opening 24 in the previous match in Brisbane.

Ian Bell's 15th run out in ODIs equals the record for the most by an England batsman, with Paul Collingwood and Allan Lamb.

But having successfully reviewed an lbw decision in the eighth over, Cook drilled a low catch to cover in the next, falling for 35. Bell (29) was then run out attempting a second in the 15th over after a direct hit from man of the match Warner.

That left the promoted Ben Stokes and fellow inexperienced left-hander Gary Ballance at the crease, and as Australia spinners Xavier Doherty and Glenn Maxwell exerted control only 21 runs were scored in nine overs.

The expectation was once again placed on the innovation of who obliged with a magnificent lofted drive over extra cover for six off left-arm paceman James Faulkner. He also stepped down the pitch to launch Coulter-Nile over long-on for six more, recording a fifty partnership from 60 balls with Ravi Bopara.

That's a proper slapping for England who were outclassed in all departments. At one stage they threatened 280 or 290 but their batting petered out. And the bowling didn't ask Australia any real questions. There was no consistent pressure which allowed Australia to coast over the line.

But the key moment arrived midway through the 42nd over when a leading edge from Morgan was scooped millimetres from the turf by Dan Christian in his follow through.

Morgan was not convinced the catch had been taken cleanly and an unseemly exchange took place between the batsmen and Australia captain Michael Clarke, before Morgan departed.

The big-hitting potential of Jos Buttler was swiftly curtailed by Christian, exhibiting wily cutters in both directions to claim 2-52 and it needed consecutive lusty sixes over mid-wicket in the final over from Bresnan to ensure even a modest total was posted.

After Bopara held a thunderous drive from Aaron Finch in the seventh over off Sussex paceman Chris Jordan, Bresnan was less effective with the ball, noticeably short of pace, as 20 came from his opening two overs.

Australia's series victory ends a run of four successive Ashes winners who have gone on to lose the ODIs.

Warner disdainfully launched the Yorkshireman's second delivery over long-on for six and, though he was caught in the covers by Bell off Stokes in the 21st over, England were never able to restrict the scoring.

Clarke's fluent 34 was ended by Bopara nipping one in off the seam but Brad Haddin cheerfully joined Marsh to punish a wearily wayward bowling unit.

Australia's pursuit of another clean sweep will continue in Perth on Friday in the penultimate match of the series, where England will be spared Clarke, who confirmed he would be rested.