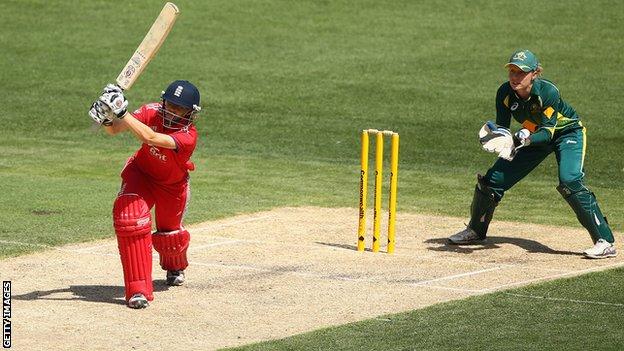 England are within one victory of retaining the Women's Ashes after a seven-wicket win over Australia in the first one-day international.

Alex Blackwell's unbeaten 82 helped the hosts post 209-3 from their 50 overs.

England slipped to 68-3 in response but an unbroken fourth-wicket stand from Lydia Greenway (69 not out) and Arran Brindle (63 not out) led them home.

England are now 8-0 up in the multi-format series having won the only Test in Perth by 61 runs earlier this month.

The Southern Stars must now win both remaining ODIs and all three Twenty20 internationals to prevent England retaining the trophy.

Captain Charlotte Edwards said her team would not underestimate Australia's powers of recovery and become overconfident despite their 6-0 advantage after that victory at the Waca.

They were given a stiff reminder two days ago after they suffered a two-wicket defeat in their warm-up match against a Cricket Australia Women's Representative XI, but took control at key moments at the MCG.

Meg Lanning, who at 21 became the youngest Australian to lead the country's senior side because of an injury to Jodie Fields, won the toss and elected to bat.

However, Australia's batters struggled to get going in the first half of their innings as England's attack bowled tightly to restrict the hosts to 68-3 after 25 overs.

Anya Shrubsole (1-55) trapped ODI debutant Elyse Villani for eight in the seventh over and Lanning departed four overs later when she sliced a wide one off Jenny Gunn (1-30) to Heather Knight at gully.

A 35-run partnership between Jess Cameron (21) and Blackwell steadied the Australian innings before Cameron chipped spinner Danielle Wyatt to mid-off, where Shrubsole took a catch above her head.

England were unable to take any more wickets as Blackwell and Ellyse Perry (65 not out) fought back to help Australia past the 200-mark on a slow-paced pitch.

"England dictated the pace of the game throughout. The bowlers kept it tight and the batters always kept themselves in front of the rate when they chasing.

"Australia were undoubtedly weakened by the loss of Jodie Fields and bowler Sarah Coyte and it was a baptism of fire for Australia's Meg Lanning as stand-in skipper.

"But that takes nothing away from Lydia Greenway and Arran Brindle who both batted beautifully. It was a pretty comprehensive victory by the end."

Edwards and Knight (9) put on 49 for the first wicket as England made a solid start to their response before the latter edged an outswinger straight to Cameron in Julie Hunter's second over.

England had a mini wobble when Sarah Taylor (9) chipped Erin Osborne's off spin, to Lanning at midwicket before Holly Ferling captured the vital scalp of Edwards (41) lbw.

However, the Southern Stars were unable to press home their advantage as Greenway survived a couple of early scares to take the game away from Australia.

The left-hander combined well with Brindle as the duo cleverly manoeuvred the ball around the field and used the batting powerplay to stay ahead of the rate.

The pair brought up their half-centuries in successive deliveries in the 43rd over with Brindle hitting the winning run with 19 balls to spare.

Greenway, who was named player of the match, says England will not take anything for granted despite having one hand on the women's Ashes trophy.

"We applied ourselves well and deserved the win. Our bowlers really set the game for us," she said.

"Australia had a good finish with the bat but we applied ourselves in our innings and we spoke about the importance of getting ourselves in on that wicket.

"We're not going to be complacent in the next game because Australia have some world-class players."