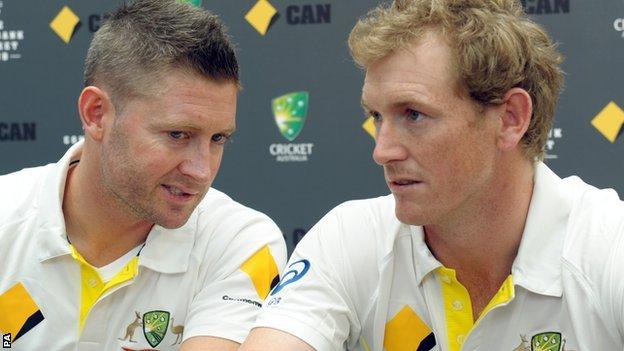 Australia have dropped George Bailey from their Test squad to tour South Africa, despite the batsman helping them to beat England 5-0 in the Ashes.

The 31-year-old has been dropped in favour of Alex Doolan and Shaun Marsh for the three-match series, which starts on 12 February.

"This was a difficult decision," said Australian selector John Inverarity.

Bailey played in all five of Australia's Ashes Tests against England this summer, scoring 183 runs at an average of 26.14 with a highest score of 53.

"We felt Alex and Shaun have games that are well suited to facing South Africa in South Africa."

Bailey averaged 26.14 against England, while he also clubbed a world record-equalling 28 runs off a single James Anderson over in the third Test.

But Australia have opted for the uncapped Doolan, 28, and 30-year-old Marsh, who played the last of his seven Tests in January 2012, to face the world's top-ranked Test team.

"We consider that both (Doolan and Marsh) are strong players of pace bowling which is important given the strength of South Africa's attack," added Inverarity.

"Alex was on standby for the recent fifth Test in Sydney and scored a most impressive 165 not out against South Africa for Australia A last season.

"Shaun is a talented batsman who is striking the ball very well at the moment. He has the technique and potential to do well."

Bailey does, however, remain captain of Australia's Twenty20 side, which has been weakened for the three-match series against England, with David Warner, Shane Watson and Mitchell Johnson all rested.