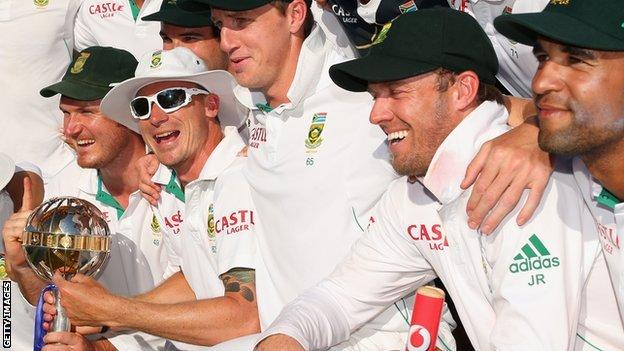 The proposals also include the formation a two-tier structure of Test cricket, with those three nations immune from relegation.

The plans will be discussed at an International Cricket Council (ICC) executive board meeting next week.

Key proposals the ICC will discuss

The proposals, drafted by the ICC's Finance & Commercial Affairs (F&CA) committee and leaked to the media last week, suggest the formation of a four-man executive committee, on which the boards of England, India and Australia would be guaranteed a place. The other position would be selected by the three boards annually.

The Future Tours Programme, which guarantees regular fixtures between all full ICC members over a cycle, would be abandoned in favour of bilateral agreements.

"This proposal is designed to vest control of the game in the three boards of India, Australia and England," added Marsh.

"It is not in the best interests of the global game and we have real fears that it will only serve to strengthen the 'big three' countries whilst the rest are left to wither on the vine."

Cricket South Africa (CSA) and the Pakistan Cricket Board (PCB) have also spoken out against the plans.

CSA, whose national side are currently ranked as the number one Test nation in the world, called on the ICC to withdraw the 'fundamentally flawed' initiative, arguing that it breached the ICC constitution.

"These proposals should first be referred to the relevant ICC committees or sub‐committees for proper consideration and to make recommendations to the ICC board," CSA president Chris Nenzani wrote in a letter to ICC president Alan Isaac.

"Although there is nothing to prevent a review of the ICC funding model or finances, the proposal self-evidently is inextricably tied up with a fundamental restructuring of the ICC, which has far‐reaching constitutional implications.

"The draft proposal is, therefore, fundamentally flawed as regards the process and, therefore, in breach of the ICC constitution."

The plans were defended by Cricket Australia chairman Wally Edwards, who said they had the best interests of the game at heart.

"Setting aside the fact that we are yet to discuss and vote, CA's approach internationally is consistent with its approach at home where we have made significant strides improving the governance of Australian cricket.

"There will be a discussion in the next few days among the ICC's full member nations about possible changes to how the ICC works.

"CA's view going into that discussion is that we need to continue to promote international cricket competitions including the primacy of Test cricket, we need to improve global cricket leadership and we support that members should be working to promote the interest of the game as their priority."

Any decision on potential changes to the structure of cricket's governing body will be made solely by the ICC board, with further discussion to take place, if required, in its meetings in April, July and October.