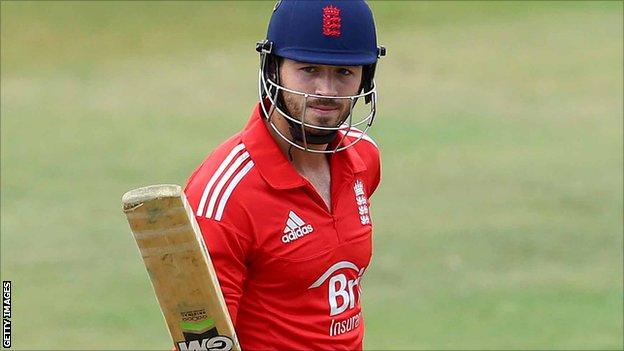 England Lions batsman James Vince says he sees their tour of Sri Lanka as the perfect opportunity to put himself into contention for the senior squad.

Vince, 22, flies to Sri Lanka on Sunday having been to Australia in the winter with the England Performance Programme.

The senior squad lost the Ashes 5-0 as well as being beaten by Australia, who have a 3-0 lead, in the one-day series.

"It's a good opportunity," Hampshire's Vince told BBC Radio Solent. "Especially with what has happened."

Having lost all five Ashes Tests, England slid to their third successive one-day defeat on 19 January.

Captain Alastair Cook admitted English cricket needed "a little bit of a change", adding: "I think there will be some changes. We have kept losing games of cricket and I haven't been able to turn it around."

And Vince, who is also part of the 30-man provisional England squad for the forthcoming T20 World Cup in March, wants to prove himself in Sri Lanka.

"If you put a few good performances out there and have a strong start with Hampshire then your name might be somewhere in the reckoning," he said.

"We are going out there as a team to try and beat Sri Lanka A but within that environment and that squad everyone will be thinking it's a good opportunity to put in some good performances and put your name forward."