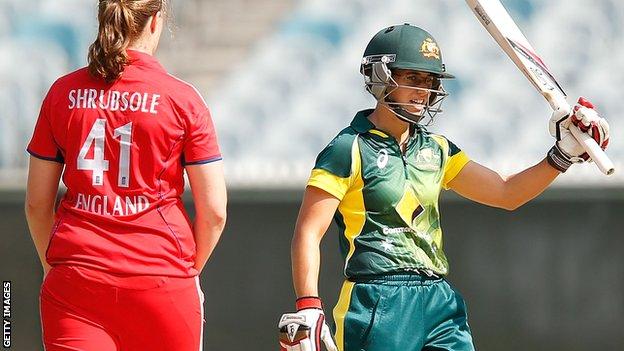 England still need another victory to retain the Women's Ashes after losing the second one-dayer by 26 runs.

Opener Nicole Bolton hit 124 on her international debut as the Southern Stars posted an impressive 266-7.

They lead the multi-format series 8-2 on points and only need one more win from the final ODI and three Twenty20 internationals to secure the Ashes.

England wicketkeeper Taylor told BBC Radio 5 live sports extra: "The Aussie girls batted beautifully, we lost wickets at crucial times and the game got away from us.

"Our fielding wasn't up to scratch, we dropped a few catches, but we're going to have to look at today as a bad day in the field."

Captain Charlotte Edwards had insisted there would be no complacency despite knowing Australia would need to win the last five games to regain the trophy.

Edwards had steered England to a five-match Ashes winning streak of their own on home soil last summer but when they went looking for an eighth straight win over their rivals in all formats, the tourists were thwarted by a bespectacled left-handed opener - just as Chris Rogers had been a thorn in their side during the men's Ashes.

Bolton had scored 85 and 46 against England in warm-up games earlier this month, but profited from a number of early let-offs after being preferred to Elyse Villani at the top of the order as she became the first Australian woman to score a century on her international debut.

The 25-year-old from Perth could have been run out for nought in the first over after pushing a risky single to Arran Brindle, whose throw was wide.

She was dropped by Jenny Gunn after edging to gully in the second over and then saw Sciver shell an even easier chance when she had 28.

If those early drops were symptomatic of a below-par day in the field for the tourists, Bolton needed no further encouragement as she dominated the opening stand of 39 with acting captain Meg Lanning before adding 95 with Jess Cameron (44) and 75 with Alex Blackwell (56).

England's seam attack, lacking the injured Katherine Brunt who has been ruled out of the series with a back injury, were unable to keep the runs down and spinner Danielle Hazell (2-44) proved their most effective bowler.

By the time Bolton was bowled by Sciver attempting an unorthodox ramp shot, Australia were 209-3 with seven overs left.

That prompted a mini-flurry of wickets as Kate Cross trapped the dangerous Ellyse Perry lbw first ball and Alyssa Healy holed out soon after, but some confident late hitting by the experienced Blackwell ensured a formidable total.

England's reply got off to the worst possible start as Edwards was bowled by Holly Ferling off the first ball of the innings while Lydia Greenway, elevated to number three, also fell cheaply to Perry.

"Nicole Bolton batted beautifully - you don't dream of playing like that on your international debut in a day-nighter at the MCG. She will remember that as long as she lives, and she was probably the difference.

"These sides are pretty evenly matched - Sciver played a superb knock at the end and England only finished 26 short. If they had built a few more partnerships, this would have gone right to the wire."

Taylor, with 10 runs from her previous three international innings on the tour, looked to be their most likely match-winner, moving up through the gears as she and opener Knight, England's player of the last Ashes series, rotated the strike well against Australia's spinners.

When Australia had dried up the runs for a couple of overs Knight was stumped trying to force the pace, but Brindle played the supporting role well as Taylor claimed some sweetly-struck boundaries.

But the Sussex wicketkeeper called Brindle through for one risky single too many and was run out by a sharp direct hit - "It was my call, just a shame I couldn't continue," said Taylor - from player of the match Bolton at backward point.

With the game still in the balance, England's lower-middle order then self-destructed in the batting powerplay as Brindle, Danielle Wyatt and Gunn fell within the space of four overs when calmer heads might have prevailed and kept England in the game.

That left Sciver as England's last hope, and while she stroked her way to a maiden international fifty, taking 13 off the 46th over including two ramped fours off Perry, her late rally was not enough.

The third and final ODI takes place in Hobart on Sunday.