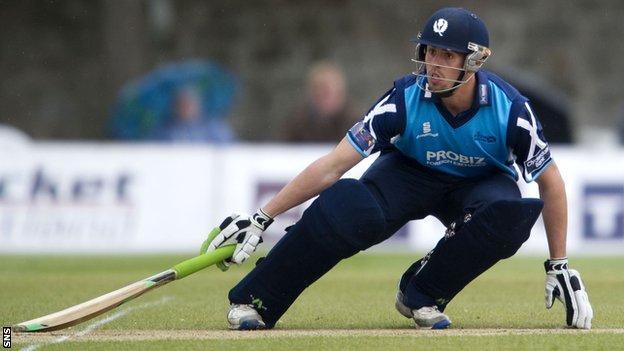 Calum MacLeod hit a stunning 175 as Scotland beat Canada by 170 runs to advance to the Super Six stage of the ICC World Cup qualifying tournament.

MacLeod shared a second-wicket partnership of 144 with Matt Machan (68) in Christchurch.

Hamza Tariq posted 71 in reply for Canada but they never looked like winning as they were dismissed for 171.

Canada put Scotland in to bat and that decision looked a good one as Matty Cross fell for just four in the fifth over, caught by Raza-ur-Rehman off the bowling of Khurram Chohan.

That brought Machan to the crease and he supplied good support for MacLeod as the pair occupied the middle for 23 overs before the former fell to Nitish Kumar with Harvir Baidwan taking the catch.

MacLeod and Coleman guided Scotland past 300 before the latter was caught by Ruvindu Gunasekera off the bowling of Jeremy Gordon and MacLeod then fell next ball.

The 25-year-old had compiled his total off just 141 balls with 14 fours and five sixes before Raza-ur-Rehman and Chohan combined once again to dismiss him.

Scotland then lost four cheap wickets in the last five overs as Chohan finished with five for 68, but the damage was already done.

Rob Taylor removed Gunasekera as he edged just the third ball of the day behind to Cross without a run scored.

Iain Wardlaw then saw off Zeeshan Siddiqi (seven) and Kumar (26) in three balls to leave Canada 38 for three and, when Jimmy Hansra (two) fell to Taylor in the next over, the North Americans were in big trouble.

Tariq's half-century helped Canada continue to occupy the crease, but no-one could stay with him for long and he was the last man to fall, caught behind off Safyaan Sharif.

In the other Group A game, the United Arab Emirates beat Hong Kong by 22 runs with both sides through to the Super Six, of which the top two teams qualify for the World Cup.