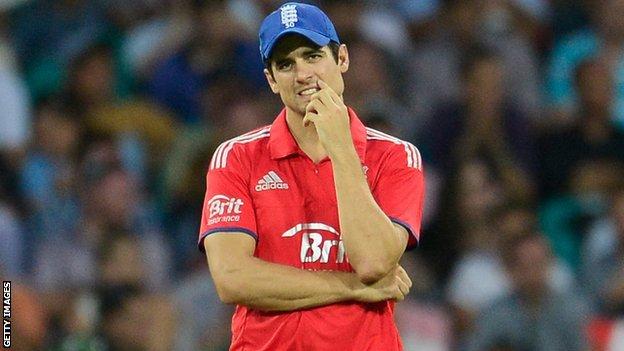 Alastair Cook says he is "desperate" to remain England captain and wants to lead the side at the 2015 World Cup.

Cook suggested he may step down after England lost the one-day series with defeat in Sydney on Sunday, having been whitewashed 5-0 in the Test series.

But he said before the fourth ODI on Friday: "I'm lucky enough to do this job. I'm desperate to carry on now."

England went on to beat Australia by 57 runs in Perth to end a nine-match losing streak.

Cook, the Test and one-day captain, has been backed by the England and Wales Cricket Board even though he has become only the third England skipper in history to suffer an Ashes whitewash.

Team-mate Ravi Bopara this week described Cook as "the best man for the job" following a troubled tour of Australia in which the captain's form with the bat has suffered.

Having finally recorded a victory over Australia in Perth, and scored 44 off 43 balls in England's 316-8, Cook explained that he is determined to be in charge for the World Cup in Australia and New Zealand next year.

He said: "I think what I've learned over three years as a one-day captain is that it would be wrong so close to a World Cup to change.

"We are getting some very valuable experience here of conditions in which we are going to play during the World Cup. If I am still given the opportunity, then I'd like to be captain."

Cook admitted his comments last week had been an emotional response to defeat, adding: "I spoke what I was feeling and sometimes you probably shouldn't do that but I did.

"We can move on from it. In the last four or five days, I have done quite a lot of talking to some of the guys. Sometimes you do need a bit of reassurance when you've lost a lot of games on a tour.

"When you chat to some guys you trust - and you respect what they're thinking - it gives you the confidence."

After racking up their second highest one-day total in Australia, England bowled out their hosts for 259 with 22-year-old Ben Stokes taking 4-38 to add to his 70 with the bat.

Cook, who is set to review the tour with team director Andy Flower after returning home following the final ODI in Adelaide on Sunday, admitted his relief at avoiding the ignominy of a double whitewash.

"It feels pretty good to be honest with you," he added. "It's been a long time coming on this tour. We know the series is gone but there was a thought of losing 10-0 - the prospect was there at the start of play.

Cook was particularly pleased with the contributions of youngsters Stokes and Jos Buttler, who top-scored with 71 off 43 balls.

"The thing I like about Stokesy is he had a tough last over in Brisbane when he didn't get it right but there was no stopping him today wanting to bowl in those last 10 (overs)," Cook said.

"He improved from Brisbane. If he keeps on that learning curve and dusts himself off when it doesn't go well, he's going to be a hell of a cricketer."

"I've seen him do that a huge amount of times for Somerset," Cook said.

"He'll be first to admit it took him a little bit of time to find his feet in international cricket but he's growing all the time.

"The game is very different to the county game and what had impressed me is how he's adapted his shots to be able to still do the damage at the end."