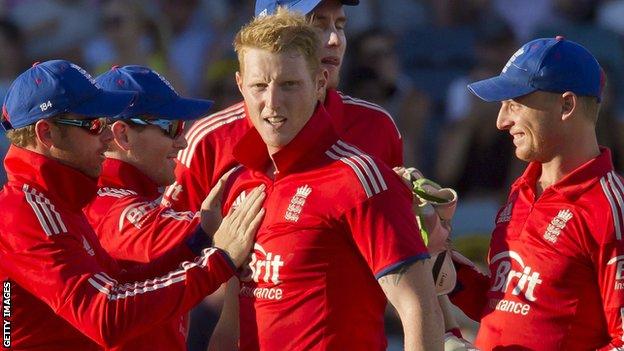 England all-rounder Ben Stokes says he wants the pressure of bowling the final overs of one-day innings for England.

Stokes scored 70 and took 4-39 in the fourth ODI in Perth on Friday as England beat Australia for the first time on tour at the ninth attempt.

"I think [captain Alastair Cook] knows. We chatted about it and I said, 'Yeah, I want to bowl at the end'," said Stokes, 22.

"I've done that role for Durham. It's not like I'm not used to it."

England are 3-1 down going into the fifth and final ODI on Sunday, before the tour concludes with three Twenty20 matches.

Stokes' 10 overs in the second ODI cost 74 runs, with James Faulkner hitting him for five sixes in the last 10 overs of the Australia innings.

"It can go one way or the other," added Stokes. "I always want to be involved in [the key moments]. I want to try and influence the result for whatever team I'm playing for."

The performances of Stokes have been a rare positive for England on a tour which saw them lose the Ashes Test series 5-0.

"This is the first time I've come up against anything like that before. I will take a lot away from this tour," he said.

"I'm always competitive and I'm always up for the fight. Every time I go out there it is a new experience.

"I don't think I've nailed my position. I've just got to put some consistent efforts in and make sure I keep my place in the team."

Meanwhile, Australia coach Darren Lehmann called on his side to improve with the bat after they were bowled out for 259 in pursuit of 317 for victory at the WACA.

Lehmann criticised Glenn Maxwell for the manner of his dismissal - caught behind aiming across the line at Stokes - which sparked a collapse from 222-5.

"He understands he has got to be a better cricketer for us. He's got the talent, but the way we want him to play, he's got to finish those games off for us."