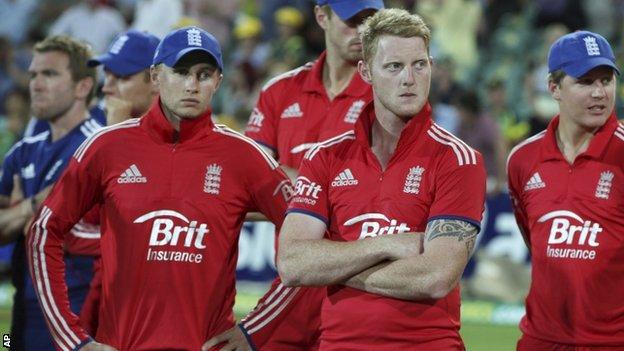 England threw away a winning position as they crumbled to a five-run defeat by Australia in the fifth one-day international in Adelaide.

Stuart Broad and Ben Stokes took three wickets apiece as the hosts were restricted to 217-9 on a slow pitch.

The tourists were cruising at 154-3 in the 36th over before Eoin Morgan and Joe Root (55) fell in quick succession.

Wickets continued to tumble as England were 212 all out in the last over to gift Australia a 4-1 series win.

The defeat sounds the final note of a dismal tour for England captain Alastair Cook, who will fly home before the teams contest a three-match Twenty20 series.

England had appeared favourites for victory right up until the penultimate over when Ravi Bopara was stumped for 25 in bizarre and controversial circumstances.

With nine needed off nine balls, Bopara missed a ball from Clint McKay, which bounced off wicketkeeper Matthew Wade's chest and onto the stumps.

Although replays did not appear to show conclusively whether Bopara had grounded his back foot before the bails were dislodged, the television umpire saw enough to give him out and expose England's final pair.

Six runs were required from three balls when James Tredwell edged Shane Watson to the wicketkeeper to send the home team - and the Australia Day crowd - into raptures.

Earlier, Broad had set the tone for an energetic England bowling performance with two wickets inside the first seven overs as Australia found runs hard to come by on a slow and low pitch.

Aaron Finch, who scored two centuries in the series, had already been dropped twice when Broad clattered his off stump with a ball that nipped back off the seam.

Watson edged behind without scoring as Australia crawled to 30-2 off 10 overs with just three boundaries.

Returning captain Michael Clarke made only eight before he bottom-edged a pull shot off Tim Bresnan onto his stumps and Shaun Marsh (36) clipped to midwicket in Stokes's first over.

George Bailey carried Australia to respectability with a patient half-century in stands of 48 and 55 with Glenn Maxwell and Matthew Wade.

"England are almost back to square one after a horrible loss. That time at the end is pressure cricket, but it should be what everyone dreams of being involved in. They are not times to fear failure, they are times to get your feathers out and win the game, the times you should live for as a cricketer.

"I don't know if people are crumbling under pressure but if you're a competitor you shouldn't do that in that situation."

But Broad removed Bailey for 56 and Wade for 31 in successive overs to check the home side's momentum.

Even the dangerous James Faulkner was limited to two boundaries in 27 balls as England averted a late flurry of runs, with Chris Jordan gaining reward for another encouraging display by taking two wickets in the final over of the innings.

England lost Ian Bell and Ben Stokes in quick succession early on as both were caught out by balls that appeared to stick in the pitch.

Bell (14) spooned a catch to mid-off trying to crack Nathan Coulter-Nile over the top, then Stokes pulled to midwicket for a duck.

Cook made 39 before he too was fooled by the pace of the wicket and prodded to cover, where Bailey took a sharp low catch.

Morgan signalled his intent by hitting Watson over his head for six as he and Root helped England make a major stride towards their target with a partnership of 63.

But after making 39 off 40 balls, Morgan drove Faulkner to mid-off in the first over of the batting powerplay to instigate a calamitous collapse.

The recalled Root, who had hit Glenn Maxwell for six to bring up his fifty, was the next to hit the self-destruct button as a paddle sweep at Faulkner looped tamely to short fine leg.

Jos Buttler made five before tugging Coulter-Nile to deep midwicket, Bresnan was run out for 13 and Broad clean bowled for seven.

After making only two of his first 20 balls, Bopara began to pierce the infield to keep the required run rate well within England's range going into the last two overs.

But a misjudgement against McKay, and a fortuitous rebound off Wade, provided the final twist in a dramatic finale and compounded England's misery on a terrible tour.