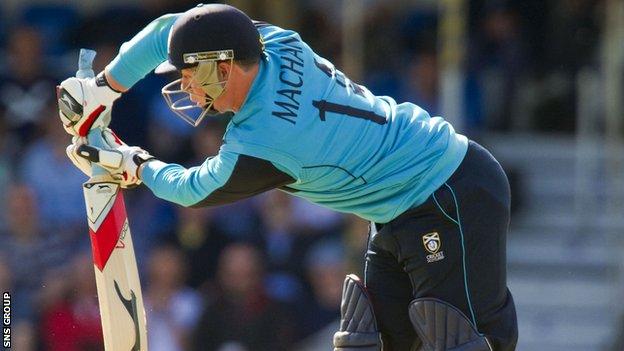 Scotland beat Namibia by 21 runs to move into second place in the Super Sixes at the ICC World Cup qualifying tournament in New Zealand.

The Scots reached 279-9 and had their opponents on 59-2 when rain prevented any further play on Sunday.

And when play resumed, Safyaan Sharif claimed four for 55 as the Africans were restricted to 258-9.

With Scotland to play Papua New Guinea and Kenya, the top two sides in the group progress to the 2015 World Cup.

Matt Machan top-scored for the Scots with 78, while Richie Berrington made 51 and Preston Mommsen 46.

Scotland won the toss and decided to bat but were dealt a blow when Calum MacLeod, who scored 175 against Canada in the final group game, departed for just 10.

Fellow opener Matty Cross then fell for 27 but Machan and skipper Mommsen put on 82 for the third wicket to guide Scotland to 154-2.

When Machan and Mommsen fell the Scots got good contributions from their middle order and Freddie Coleman scored 32 before being dismissed by Bernard Scholtz, the pick of the Namibia bowlers with 3-55.

Taylor and Michael Leask fell cheaply but Berrington held the innings together as he brought up his half-century off 46 balls.

Louis van der Westhuizen was the first to fall in reply as he went for just nine, caught by Machan off Taylor.

Sarel Burger was then clean bowled by Taylor to leave Namibia 39 for two before Stephan Baard (28 not out) and Craig Williams (eight not out) held the fort until the rain came.

When play resumed on Monday, Baard was first to fall for 36 as he was run out but Williams and Nicolaas Scholtz put on 80 for the fourth wicket before the latter was bowled by Sharif for 38.

Williams had brought up his half century off 76 balls but he was next to go for 57 as Sharif claimed another victim to leave Namibia 166 for five with 13 overs remaining.

Christi Viljoen followed for just two and after that Namibia were never able to get near the required rate.