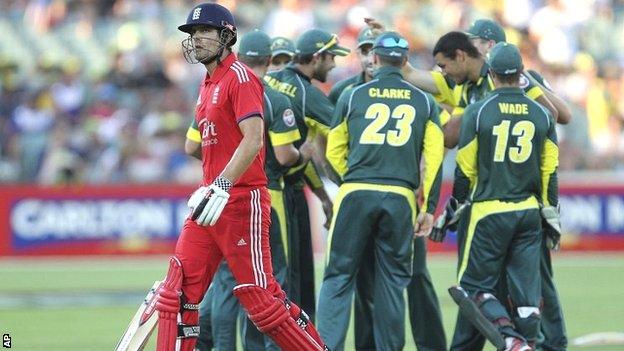 Captain Alastair Cook will miss England's limited-overs tour of the West Indies which starts in February.

After the 5-0 Ashes loss in Australia, Cook's team lost the one-day series 4-1 and the Caribbean trip will be used as preparation for the World Twenty20.

"The T20 guys have got their World Cup in Bangladesh [starting on 16 March] and we see it as a great six weeks for them to start building," Cook said.

"They're never together very often and it gives them time to build."

England limited-overs coach Ashley Giles said Twenty20 captain Stuart Broad, who has never previously skippered the team in a one-day international, would probably be in charge for the three ODIs in the Caribbean from 28 February to 5 March.

Those matches are followed by three Twenty20 internationals from 9-13 March, while the ICC World Twenty20 starts three days later and runs until 6 April.

"We are probably going to pick mainly a T20 squad leading up to Bangladesh so it's likely Stuart Broad will captain," Giles explained.

Cook admitted that the England team would focus more on one-day internationals in the build-up to the 50-over World Cup in Australia and New Zealand starting in February 2015.

"Over the last year with back-to-back Ashes the priority was Test cricket, but with the World Cup that has to change," he said.

"England are almost back to square one after a horrible loss. That time at the end is pressure cricket, but it should be what everyone dreams of being involved in. They are not times to fear failure, they are times to get your feathers out and win the game, the times you should live for as a cricketer. I don't know if people are crumbling under pressure but if you're a competitor you shouldn't do that in that situation."

Following a third successive defeat in the one-day series on 19 January, Cook, who succeeded Andrew Strauss as one-day captain in May 2011, hinted that he was prepared to step down, commenting that English cricket "needs a little bit of a change".

He subsequently retracted those remarks and insisted he was "desperate" to remain England captain and lead the side at the 2015 World Cup.

Asked about threatening to resign, he said: "I just spoke very honestly and maybe I shouldn't have done because it's caused a lot of kerfuffle."

And on the subject of when he would meet team director Andy Flower and new England managing director Paul Downton to discuss his future, Cook added: "I fly home on Monday, and over the next week or so I'm sure there will be meetings to have."

Asked if he felt a sense of relief to be returning home, Cook added: "It's a sense of a job which hasn't been done well. Mentally I could do with a break from cricket."

Meanwhile, Giles offered no excuses after his team lost their last seven wickets for 59 runs to be bowled out for 212 and lose the final ODI in Adelaide by five runs.

"There's no hiding place, we got it wrong again. Everyone will say from a position of 155-3 you should win those games," he said.

"There's no doubt guys should take great joy in winning games for their country and we are giving wickets away too cheaply in the wrong circumstances."

When asked if Cook was still the right man to lead the one-day side, Giles replied: "Absolutely. We realistically could have won the series, we missed an opportunity at Brisbane and again here so we could have won 3-2. That's not all down to the captain."