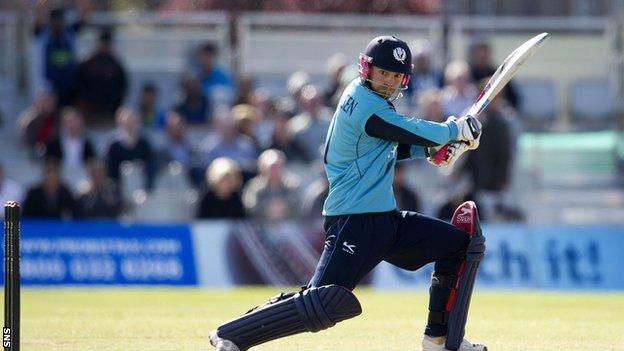 The Scots, who won the toss, elected to bat and Preston Mommsen top scored with 94.

Mommsen took advantage of a dropped catch on 65 as the Scots nudged their score towards 300.

PNG, frustrated by Scotland's bowling, were restricted to 236 all out in pursuit of 289 for victory.

Victory for Scotland against Kenya on Thursday would see them book their place at the 2015 World Cup.

"We're confident of winning and progressing to the World Cup," he told BBC Scotland.

"We're taking each game as it comes and there have been some strong individual performers. Our batting and bowling units have functioned well together.

"We're sharing the runs and wickets around which has been the foundation of our success."

World Cup qualification is vital for the profile of cricket in Scotland, Wright added.

"Hopefully, that's something we'll achieve after another win on Thursday," he said.

"We lost the first game of this tournament against Hong Kong and every game we've played has been huge.

"We've been encouraging the players to embrace the challenge of these must-win situations and the Kenya game is no different."